Editor's Note: Tumors of the thymus gland are a group of rare diseases, on which both patients and doctors lack of knowledge and information. International Thymic Malignancy Interest Group (ITMIG) has launched the initiative: May – Thymic Malignancy Awareness Month. ITMIG aims to increase the knowledge of these rare neoplasms among patients and their families, as well as among doctors of various specialties with a series of events including the interviews with mediastinal disease experts released on the journal Mediastinum. Prof. Meinoshin Okumura, as a prominent expert in the field of thymic diseases, was invited for the interview.

Mediastinum: Would you please briefly introduce the evolution of surgical management of thymic malignancy?

In Japan, the first thymectomy for myasthenia gravis was done by Tashiro in 1939, and the first removal of mediastinal tumor was done by Tsuda for resection of dermoid cyst in 1948.

Mediastinum: Would you please clarify in which situation experts of multidisciplinary team are needed to select appropriate treatment strategies for patients?

Prof. Okumura: Multidisciplinary treatment should be considered when complete resection of the primary tumor seems difficult or when metastasis to the pleura is suspected. Chemotherapy alone is chosen as the preoperative induction therapy for thymoma, but concurrent chemoradiotherapy is more commonly administered for thymic carcinoma.

Multidisciplinary treatment is also performed when surgical resection was incomplete. In most cases, radiotherapy is performed.

Mediastinum: What are the most widely used staging systems for thymic tumors?

Mediastinum: What are the key advances and challenges in developing a comprehensive and consistent staging system for thymic tumors?

Prof. Okumura: Global database is essential for developing the staging system. In 2010’s, ITMIG proposed establishing the global database and the academic societies in each continent and region agreed to it. Finally, clinical data of nearly 10000 cases were collected, and IASLC analyzed. International collaboration of academic societies is the key of staging project.

Mediastinum: Is there any significant or innovative research on thymic tumors that impresses you most in recent years? And what kinds of research are most needed to further the understanding of thymic tumors in your opinion?

Mediastinum: Would you please introduce the most significant achievements of Japanese Association for Research of the Thymus (JART) in recent years? What are its future goals?

JART database was updated last year, and another result will be obtained in the near future.

Mediastinum: Would you have any suggestions or expectation for ITMIG to promote global efforts and cooperation in the filed of thymic malignancies research.

Prof. Okumura: I suggest more studies in thymoma-associated autoimmune diseases. Especially, outcome of the patients with Good’s syndrome is quite poor, and we need to know the characteristics of this disease in more details and sharing the information in ITMIG would lead to standard treatment strategy. 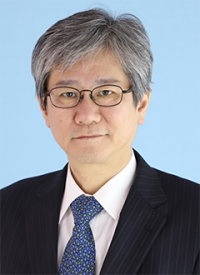 Dr. Okumura has joined the board of surgery in Japan and the board of general thoracic surgery in Japan. He has also taken an active part in academic activities. He was the President of Japanese Association for Chest Surgery (JACS) from 2013 to 2017. He is the President of Japanese Association for Research on the Thymus (JART), as well as the member of European Society of Thoracic Surgeons (ESTS), European Association of Cardiothoracic Surgery (EACTS) and International Thymic Malignancy Interest Group (ITMIG). He has been an International councillor of ESTS from 2019.

Provenance and Peer Review: This article was commissioned by the editorial office, Mediastinum for the series “Meet the Professor”. The article did not undergo external peer review.

Conflicts of Interest: Both authors have completed the ICMJE uniform disclosure form. The series “Meet the Professor” was commissioned by the editorial office without any funding or sponsorship. AL reports that she is a full employee of AME Publishing Company. MO declares no conflicts of interest.

Open Access Statement: This is an Open Access article distributed in accordance with the Creative Commons Attribution-NonCommercial-NoDerivs 4.0 International License (CC BY-NC-ND 4.0), which permits the noncommercial replication and distribution of the article with the strict proviso that no changes or edits are made and the original work is properly cited (including links to both the formal publication through the relevant DOI and the license). See: https://creativecommons.org/licenses/by-nc-nd/4.0/.