Dr. Ryuichi Waseda is currently a staff surgeon of the Department of General Thoracic, Breast, and Pediatric Surgery of Fukuoka University Hospital as well as an assistant professor of the department.

He graduated from Kanazawa University, Faculty of Medicine in 2001, and completed the training of thoracic surgery in Kanazawa University. He also got his degree of medical science in the research for airway reconstruction using robotic technology. Additionally, he was working in Medical University of Vienna as a clinical fellow in 2014/2015. The collaborative works with Medical University of Vienna have been done, mainly in clinical and scientific activities of lung transplant, and the collaboration is continuing.

His main focus of research and clinical activities is in lung transplantation. Also, his interests lie in thoracic oncology and innovation of minimally invasive thoracic surgery. His research of innovative fluorescence technique with vitamin B2 in lung cancer surgery got grants from the Japan Society of the Promotion of Science, and the results was awarded a prize in the World Conference of Lung Cancer 2016. To date, he has published more than 30 articles in the field of thoracic surgery.

Dr. Pietro Bertoglio is a staff surgeon of the University Hospital of Bologna, Italy. His clinical, surgical and research interest is mainly focused on lung cancer multimodal treatment and malignant pleural mesothelioma.

He has published numerous original and review articles in peer-reviewed journals. He is an active member of EACTS, ESTS and IASLC.

Disclosure:
The series “Management of Giant Mediastinal Tumors” was commissioned by the editorial office, Mediastinum without any sponsorship or funding. Drs Ryuichi Waseda & Pietro Bertoglio are serving as the unpaid Guest Editors for the series. 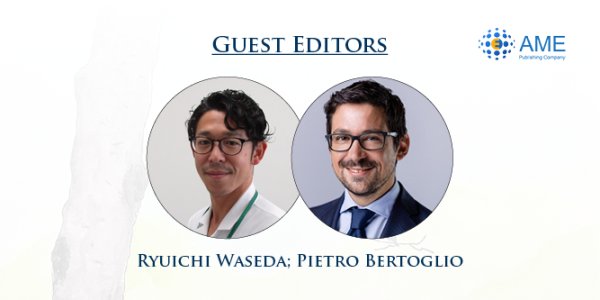