Taste disorder in a patient with invasive thymoma without myasthenia gravis: a rare case report

Taste disorder has been reported as a non-motor symptom caused by myasthenia gravis (MG)-related autoimmune mechanism, which is seen in about 5% of MG cases (1). These patients commonly have thymoma and is associated with severe MG. Taste disorders might be induced by undetermined antibodies associated with thymoma and targeted on taste buds, as for MG. Taste disorder sometimes recovered along with MG treatment, such as thymothymectomy, immunosuppressive treatment. However, symptom of taste disorder in thymoma patients without MG is very rare. Here, we reported a case of invasive thymoma without MG which had concurrent taste disorder. The taste disorder was successfully treated with cyclosporine. We present the following case in accordance with the CARE reporting checklist (available at https://med.amegroups.com/article/view/10.21037/med-21-28/rc).

A female in her seventies visited a local hospital for difficulty swallowing. Upper gastrointestinal endoscopic examination revealed severe esophageal ulcer. In addition, chest computed tomography (CT) examination revealed an anterior mediastinal tumor of 78-mm in diameter and left pleural effusion. She was referred to our hospital. She had a past history of chronic anemia for several decades, chronic thyroiditis, osteoporosis, and left mastectomy for breast cancer in her forties. She also had taste disorder, limited to sweet taste, for five years. She was previously examined by several otorhinolaryngologists but the cause of taste disorder remained unknown. Symptoms and physical findings showed no feature of MG. Pre-operative blood examination revealed moderate anemia; hemoglobin 8.2 g/dL (normal, 11.8–15.1 g/dL) and no elevation of anti-acetylcholine receptor antibody (AChRAb). Contrast-enhanced CT revealed multiple pleural nodules in addition to the anterior mediastinal tumor. CT guided-biopsy revealed type B2 thymoma. Clinical stage was Masaoka stage IVa because of pleural dissemination (Figure 1). Bone marrow biopsy revealed pure red cell aplasia (PRCA). Taste disorder and PRCA were thought to be thymoma-associated symptoms. However, the cause of severe esophageal ulcer were undetected even if biopsy was done. We decided to perform radical operation for primary thymoma and pleural dissemination. 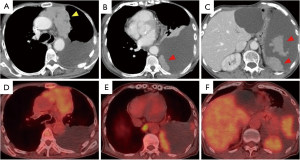 Extended total thymothymectomy, combined resection of left upper lobe, phrenic nerve, and pericardium, and resection of all detectable pleural disseminations was performed. Pathological examination showed type B3 thymoma (dominant B3 with B2) (Figure 2).

After operation, there was no improvement in taste disorder, PRCA, and severe esophageal ulcer. Six months after operation, cyclosporine was administered 150 mg per day for PRCA. In parallel with gradual improvement of anemia, taste disorder also gradually improved. Three months after the first administration of cyclosporine, taste disorder had completely recovered. There was no improvement in esophageal ulcer. She has no recurrence of thymoma for three years. Administration of cyclosporine was continued and symptoms of anemia and taste disorder remained stable (Figure 3). All procedures performed in this study were in accordance with the ethical standards of the institutional and/or national research committee(s) and with the Helsinki Declaration (as revised in 2013). Written informed consent was obtained from the patient for publication of this case report and accompanying images. A copy of the written consent is available for review by the editorial office of this journal. 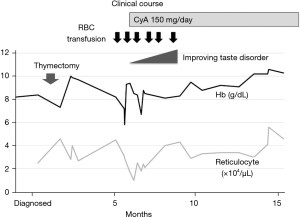 To the best of our knowledge, there have been no report about the association of severe esophageal ulcer and thymoma. Unlike PRCA and taste disorder, esophageal ulcer did not recover after thymothymectomy and administration of cyclosporine. Esophageal ulcer might be independent from thymoma, but it could have been a paraneoplastic syndrome. More case reports are required for further discussion.

We would like to thank Edanz (https://jp.edanz.com/ac) for English language editing.

Reporting Checklist: The authors have completed the CARE reporting checklist. Available at https://med.amegroups.com/article/view/10.21037/med-21-28/rc

Conflicts of Interest: All authors have completed the ICMJE uniform disclosure form (available at https://med.amegroups.com/article/view/10.21037/med-21-28/coif). The authors have no conflicts of interest to declare.

Ethical Statement: The authors are accountable for all aspects of the work in ensuring that questions related to the accuracy or integrity of any part of the work are appropriately investigated and resolved. All procedures performed in this study were in accordance with the ethical standards of the institutional and/or national research committee(s) and with the Helsinki Declaration (as revised in 2013). Written informed consent was obtained from the patient for publication of this case report and accompanying images. A copy of the written consent is available for review by the editorial office of this journal.