GLOBOCAN estimated 18.1 million new cases and 9.6 million cancer deaths worldwide in 2018; in that year, new lung cancer was expected to be 2 million (11.6%) and lung cancer death 1.76 million (18.4%) (1). Considering that lung cancer has an unfortunate prognosis [five-year survival rate: 18% (2)], early detection as well as proper staging and treatment are fundamental to improve survival rate. In this context, the accurate assessment of the mediastinal lymph node status is of paramount importance for the stage assignment as well as crucial for the therapeutic plan. The European Society of Thoracic Surgeons (ESTS) published a guideline for preoperative mediastinal staging in 2007, subsequently updated in 2014 (3). According to the updated version, all patients with non-small cell lung cancer (NSCLC) who are eligible for curative pulmonary resection should undergo preoperative “invasive” mediastinal staging. Exceptions to this rule are patients with non-adenocarcinoma NSCLC, peripherally located, smaller than 3 cm and with negative mediastinum at the positron emission tomography (PET) and computed tomography (CT). Endobronchial ultrasound-guided transbronchial needle biopsy (EBUS-TBNB) was regarded by the ESTS guideline as the first choice for investigating mediastinal lymph nodes (3). Such recommendations were common to the American College of Chest Physicians Evidence-Based Clinical Practice Guidelines (4).

Researchers from Shanghai published a meta-analysis in 2015 comparing the overall diagnostic values of video-assisted mediastinoscopy and EBUS-TBNA (5). The Authors concluded that specificity and positive predictive value were 100% in both procedures. Pooled sensitivity for video-assisted mediastinoscopy and EBUS-TBNA was 86% and 83% respectively; meta-regression analysis denied any significant difference between the two procedures. Despite the EBUS-TBNA sensitivity was satisfactory, it was not high enough to exclude mediastinal lymph node metastases; therefore devices and technologies were implemented to increase its sensitivity.

The purpose of this narrative review is to describe the tools aimed at correctly interpreting sonographic patterns during EBUS and maximizing the diagnostic accuracy of TBNA. We present the following article in accordance with the NARRATIVE REVIEW reporting checklist (available at http://dx.doi.org/10.21037/med-20-36).

Inclusion criteria were: original article, English language, clinical trial (randomized, prospective or retrospective). Abstracts identified by this search were independently reviewed by two authors; discrepancies were resolved by the third authors. The selected articles were examined in full. Afterwards, a manual search was started on the basis of the selected articles.

Krasnik and collaborators published a case series of mediastinal staging performed with a new instrument in 2003. The Danish researchers used a prototype fibrobronchoscope that allowed the complete ultrasonic control of the mediastinal lymph node fine-needle aspiration performed with a dedicated needle (6). This technique (EBUS-TBNA) was an immediate success due to its high diagnostic accuracy and negligible complication rate. Many articles have been published confirming the validity of the procedure as well as the possible technical tool aimed at maximizing its diagnostic performance.

In the early 1990s, some researchers tried to establish a correlation between ultrasound appearance and possible diagnosis of lymphadenopathies. The sonographic features deemed as a sign for metastatic lymph nodes were: size >10 mm, round shape, distinct margin, heterogeneous echogenicity, absence of central echogenic hilum, and coagulation necrosis (7,8). In 2010, Fujiwara and collaborators published the first paper on sonographic features of mediastinal lymph nodes obtained by EBUS (9). The Authors retrospectively reviewed images and digital video of 487 patients and classified the lymph nodes on the basis of the six sonographic features mentioned above. Heterogeneous echogenicity and the presence of the coagulation necrosis sign had the higher positive predictive value for malignancy (69.5% and 79.9% respectively). These two parameters as well as round shape and distinct margin were independent predictive factors for nodal metastasis. Fujiwara concluded that if at least one of these four sonographic features is observed during the EBUS procedure, needle aspiration is mandatory. 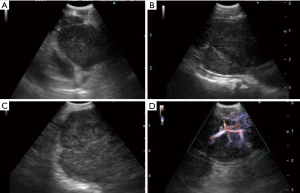 Figure 1 Ecographic patterns of pathological lymph nodes. The sonographic nodes assessment include grey-scale images and those with power/color doppler. (A,B,C) Ultrasonographic grey-scaler images of metastatic lymph nodes, where there is no differentiation between the cortex and the hilum. (D) Color-Doppler image in metastatic lymph node: multiple vessels branch from the hilum irregularly with avascular areas in the peripheral region.

The sonographic features mentioned have been variously combined to create scoring systems useful for identifying those lymph nodes which, due to a negative cytological outcome, will require further EBUS-TBNA or mediastinoscopy sampling (12-15). The most recent and likely most reliable scoring system is the Canada Lymph Node Score (16) published in 2019. Such score system includes only features assessed during EBUS procedures and prospectively collected; the model included inter-rater reliability as well as wide external validation assessment. Lymph node small-axis >10 mm, absence of central hilar structure, well defined margins, and presence of central necrosis were predictive of malignancy in the Canadian trial; a score of 1 was assigned to each sonographic feature resulting in a maximum score of 4 for each node. Lymph nodes scoring of 0–2 had small probabilities of being metastatic, whereas a score of 3 was regarded as the cut-off for malignancy.

In addition to offering high-quality ultrasound images, EBUS convex probes allow Doppler evaluation of the mediastinal structures. Color-doppler is essentially used to identify large vascular structures and avoid them during biopsy, but it is also useful for defining the vascularization of the lymph nodes. In 2012, Nakajima and collaborator published e retrospective study aimed to establish the vascular image pattern classification of lymph nodes during EBUS (17). The authors evaluated 173 mediastinal lymph nodes by color-Doppler and graded the vascular patterns with flow directed toward the probe (red signs) in four grades; the vascular pattern with flow directed away from the probe (blue signs) was considered as an autonomous class. Lymph nodes with no blood flow were defined as grade 0; lymph nodes with few “red” vessels running toward the center were identified as grade 1. These two grades had low probability to be metastatic. Lymph nodes with few dot-like or rod-shaped red signs were considered as grade 2; lymph nodes with several “red” vessels that had different size and directions were allotted at grade 3. The grade 2 and 3 vascular patterns had high probability to be metastatic; this 4 steps grading had the sensitivity, specificity, negative predicting value, positive predicting value, and diagnostic accuracy rate for malignancy of 87, 69, 71, 86, and 78%, respectively. “Blue” vessels in a lymph node was considered as a malignant sign, its sensitivity, specificity, negative predicting value, positive predicting value, and diagnostic accuracy rate were 75%, 84%, 81%, 79%, and 80%, respectively (Figure 1).

It is known that the infiltration of neoplastic cells into healthy structures causes tissue stiffening that can be used to increase the diagnostic yield of ultrasound investigations. The first application of this concept took place in the 1990s for the diagnosis of breast cancer. This technology, called elastography, was subsequently applied to endoscopic instruments. French researchers reported the first use applied to EBUS in 2013: dedicate probes and software coupled tissue elasticity to a colour code generating a colour map that was superimposed to B-mode ultrasound image (19). Izumo and collaborators investigated the usefulness of elastography during EBUS in 2014 (20). The Authors retrospectively analyzed 75 hilar and mediastinal lymph nodes; the elastography patterns were described and classified following the predominant color: type 1, predominantly non-blue; type 2; partially blue, type 3; mostly blue (malignancy rate in lymph node type 1, 2 and 3 was 0, 57 and 94%, respectively).

Given that Izumo's classification was clearly subjective, at least three quantitative methods have been proposed to make the interpretation of elastography more objective. One method considered the pure strain histogram returned by the probe; a more sophisticated method calculated the stiff area ratio (blue-coloured pixel area divided by entire area of the lymph node) (19,21). Finally, the third method measured the strain ratio between two not overlapping areas (an extra-nodal reference area divided by the lymph node area) (22).

Recently, Dutch researchers published a trial aimed to analyze the clinical impact of two qualitative and two semi-quantitative techniques (23). The qualitative methods designed to classify the elastographic aspects of lymph nodes included an original grading (grade 1, predominantly blue; grade 2, blue and green; grade 3, mostly green; grade 4, green and red; grade 5, predominantly red) and a modified grading from a breast cancer ultrasound classification. The first semi-quantitative method was the mean of the strain elastography histogram obtained from a rectangular area selected by the operator on the visualized lymph node. The second semi-quantitative scoring system was the strain ratio between two not overlapping areas (lymph node versus extra nodal tissue). The four techniques were simultaneously tested on 120 lymph nodes. All methods demonstrated high diagnostic accuracy; the Authors regarded the semi-quantitative mean histogram scoring method (cut-off: 78; range from 0 to 255) as the best and most reproducible method (sensitivity, specificity, positive predictive value, negative predictive value and accuracy were 93%, 75%, 69%, 95% and 82%, respectively).

The correct treatment of early-stage non–small-cell lung cancer is directly correlated to a careful evaluation of the mediastinal lymph nodes. TAC and PET are valuable tools to achieve a preliminary picture of the mediastinal staging; notwithstanding, invasive staging is mandatory in the majority of the patients, as recommended by updated guide-lines. Over the past decade, EBUS-TBNA has gained a leading role in the invasive mediastinal staging, leaving mediastinoscopy as a backup technique in the case of inconclusive cytology. Sonographic features, vascular patterns and ultrasound elastography are certainly helpful in directing the operator to biopsy the most suspect lymph node, especially in patients with CT-negative and/or PET-negative mediastinum. In the event of inconclusive biopsies, the techniques described above may also assist surgeons in deciding for new EBUS-TBNA, mediastinoscopy or direct access to pulmonary resection.

Provenance and Peer Review: This article was commissioned by the Guest Editor (Angelo Carretta) for the series “Minimally Invasive (Endoscopic) Mediastinal Staging of Lung Cancer” published in Mediastinum. The article has undergone external peer review.

Conflicts of Interest: All authors have completed the ICMJE uniform disclosure form (available at http://dx.doi.org/10.21037/med-20-36). The series “Minimally Invasive (Endoscopic) Mediastinal Staging of Lung Cancer” was commissioned by the editorial office without any funding or sponsorship. PM serves as an unpaid editorial board member of Mediastinum from Apr 2020 to Mar 2022. The authors have no other conflicts of interest to declare.

Ethical Statement: The authors are accountable for all aspects of the work in ensuring that questions related to the accuracy or integrity of any part of the work are appropriately investigated and resolved.