Management of bleeding complications during thymectomy by subxiphoid approach with double elevation of the sternum: a case report

Thymoma is the most common tumor of the anterior mediastinum (1). Surgical resection for thymoma has been recommended as the principal treatment, and the completeness of resection has been considered the most important determinant of the long-term survival (2,3). Video-assisted thoracic surgery (VATS) techniques have been widely used for resection of mediastinal tumors (4). Though patients with VATS thymectomy achieved better surgical outcomes and fewer complications than those who received open thymectomy in thymoma, including reduced postoperative pain, fewer complications such as bleeding and pneumonia, shorter hospital stays (5), open surgery often remains as the first choice whenever unmanageable bleeding or incomplete resection happened during surgery for safety and surgical veracity consideration.

However, bleeding is the most common reason for conversion to open surgery during VATS, and most patients with advanced thymomas wasn’t recommended with VATS because of high risk of catastrophic bleeding when major vessels like innominate vein is hurt as dissecting the invaded tumors (6). Given these reasons, controlling bleeding during VATS is critical in finishing minimally invasive surgery (MIS), as well as broadening the indication of MIS in advanced stage thymomas.

Zielinski et al. reported this novel minimally invasive subxiphoid single-port right VATS approach in 2013, which enabled complete removal of the whole thymus in case of early and advanced stage thymomas (7,8), bleeding control under this surgical method was noted as safe and feasible for the enlarged surgical field (9). We have been practicing and making improvements to this approach in recent 5 years, with the accumulation of more than 150 cases, which should be known as the largest center for subxiphoid approach with double elevated of sternum, and two hooks improves the stability of the equipment. In this study we reported a case of bleeding control with this approach after unexpected damage to innominate vein to address the advantage of bleeding control using this specific surgical approach.

We present the following article in accordance with the CARE reporting checklist (available at http://dx.doi.org/10.21037/med-20-50).

The case was a 66-year-old female patient with an anterior mediastinal mass incidentally detected during physical examination in November 2017. She was diagnosed with thymoma through computed tomography (CT) scan and magnetic resonance imaging (MRI), which showed a soft tissue density mass with a diameter of 5 cm, and the patient had hypertension. Injury to an innominate vein occurred during a subxiphoid approach with double elevation of the sternum. It was well managed by controlling the bleeding site with Alice forceps and suture under thoracoscope view without conversion to median sternotomy. Intraoperative blood loss was 350 mL. The drainage tubes were removed on postoperative day (POD) 2, and the patient was discharged on POD 3. Histopathological examination after surgery confirmed the lesion to be a type B2 thymoma, and postoperative adjuvant radiotherapy was recommended. The patient recovered well and didn’t complain of pain after surgery.

All procedures performed in studies involving human participants were in accordance with the ethical standards of the institutional and national research committees and with the Helsinki Declaration (as revised in 2013). Written informed consent was obtained from the patient for publication of this manuscript and any accompanying images.

The patient was in a lithotomy position, then a vertical 4-cm incision is made above the xiphoid process. The subcutaneous tissue is cut and the medial parts of the rectus muscles are cut near the insertions to the costal arches. A sternal retractor connected to the traction frame is placed under the sternum, which is elevated to facilitate access to the anterior mediastinum from below. Then another sternal retractor was placed under the superior border of sternum with a 1-cm transverse incision.

Always get prepared for open surgery

Whenever unexpected bleeding occurred during surgery, one of the surgical team members should call for all the possible surgical instruments for open surgery, including sternum saw (which should be charged before surgery and always prepared at the operating room). Safety is always in priority so quick conversion should be performed at any moment and minimally invasive consideration should be put in secondary. The patient was in lithotomy position previously, so it would be very convenient to convert to supine position and the surgical area was already sterilized, making the conversion simple and fast.

The bleeding pressure was acceptable, but the distance between the incision of xiphoid process and the bleeding site was far. For this reason, a sucker was used to temporarily compress the damaged area to control bleeding, then another operating port was made from the third intercostal space, about 2–3 cm away from the sternum. A wound protection cover was placed on the incision. Two Alice forceps were used to control the bleeding site and continues bleeding was paused (Figure 1). After clearance of the surgical field with saline wash and suction, 4-0 PROLENE line was used with an elbow needle holder under the thoracoscope to suture continuously. No bleeding was found after loosen of two Alice forceps and saline wash. Complete thymectomy was continued afterwards. Intraoperative blood loss was counted as 350 mL (Figure 2). 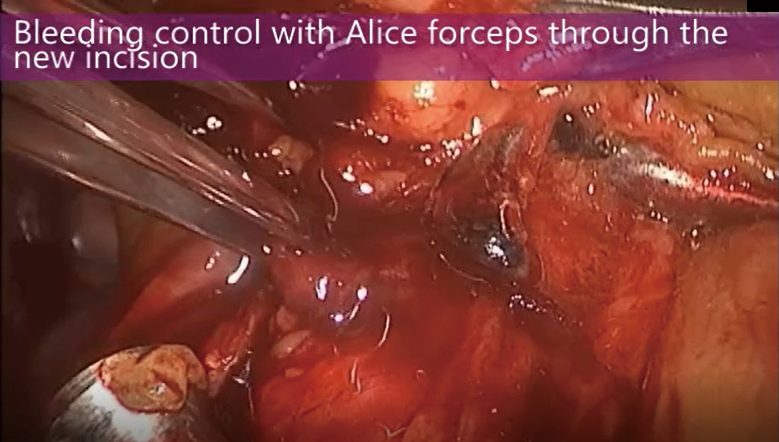 Figure 1 Bleeding control with Alice forceps through the new incision during surgery.

Thymus surgery is different from lung surgery especially in MIS because the tumor is usually tightly connected to major vessels of systemic circulation or other vital structures on anatomical level (10). Safety is considered in the first place prior to the dramatic reduction of trauma by MIS. However, with the development of MIS instrument and accumulation of clinical experience, bleeding control is no longer forbidden zone, especially for the double elevated approach, as the room for operating is no less than open surgery (11).

Mediastinal structures are located behind the sternum. If there is an emergency, it is not easy to open the chest quickly to get access to the bleeding site. Therefore, a reasonable plan should be made before operation. The tissue behind the sternum is easier to split from the sternum, so it created the condition for a quick median sternotomy. In addition, the patient is in a lithotomy position so that the patient can be directly converted to the supine position for sternum splitting, which gives the surgeon more courage for the attempt of bleeding control.

In this case, we found that the incision under xiphoid process is far away from the bleeding site, which is not convenient for clamping and suture, so we immediately take another operation port above the bleeding place to control the bleeding. In our opinion, there shouldn’t be any limit for the port number, if the surgical view and operating room could be guaranteed.

To get more space to facilitate the mediastinal surgery or good exposure of the site we operate, Subxiphoid surgery might be divided into two methods: air inflation (carbon dioxide) and elevation of the sternum with retractors (12,13). If there is an emergency for bleeding during the operation, the method of retractor has more advantages. First, when carbon dioxide aeration method is used, due to the inflation situation, the operation port can’t be supplemented in time to assist the operation. Meanwhile, the suction device will also lead to insufficient air pressure due to the suction of carbon dioxide, resulting in the poor surgical view and space when performing blood suction, which makes a conversion to open an inevitable choice.

How can we decide to control the bleeding and finish the repair the of rapture of the vessel in VATS or to transfer to open with sternotomy? The most important and critical problem to be solved is whether we can control the bleeding in the first place without large amount of blood loss and declining of patient condition. Therefore, the first attempt to control bleeding site should be well thoughted and calmful to provide a buffer time for the thinking of next step, and the following procedure for suture and repair is quite easy on a technical level. It should be noted that repeatedly clamping on the bleeding spot might lead to tearing of the vessel and huge amount of bleeding would be lost, and we also do not recommend violent suction to the bleeding hole, because this action won’t make you see better, but would probably enlarge the hole and aggravate bleeding. Whether converting to open surgery also depend on the operator’s habits and previous experience, even on whether the assistant is familiar or not, and whether the equipment available is as usual, because it is very import for the cooperation in this surgery when bleeding happened.

Funding: This work was supported by the National Natural Science Foundation of China (81870008).

Reporting Checklist: The authors have completed the CARE reporting checklist Available at http://dx.doi.org/10.21037/med-20-50

Conflicts of Interest: All authors have completed the ICMJE uniform disclosure form (available at http://dx.doi.org/10.21037/med-20-50). The authors have no conflicts of interest to declare.