A fatal case of post endobronchial ultrasound transbronchial needle aspiration endobronchial haemorrhage: a case report and review of the literature

Upfront a clinical and radiological suspicion of lung cancer, several imaging and endoscopic techniques are available to carry out an accurate tumor staging. In this regard, both conventional bronchoscopic and endoscopic ultrasonographic evaluations represent the cornerstone for both tumor and mediastinal evaluation. According to the American College of Chest Physicians Guidelines (1), endobronchial ultrasound transbronchial needle aspiration (EBUS-TBNA) allows a reliable and essential locoregional cancer staging, although its use in routine clinical practice has been limited in the past decades due to both its dependency on nodal size and location as far as operator skills (2). Endoscopic techniques are generally considered at low risk for airway bleedings (3), although several risk factors have been recognized such as coagulopaties, uremia, liver diseases, pulmonary hypertension, oral anticoagulation regimens and operator learning curve (4). Despite a not negligible risk of life-threatening complications, procedures are usually scheduled in one-day surgery hospital stay, with an in-home discharged after adequate clinical control (5). Current guidelines, however, seem to struggle with patients’ complexity and comorbidities which could claim a longer post-operative observation period.

We present the following article in accordance with the CARE reporting checklist available at http://dx.doi.org/10.21037/med-20-33.

A 67-year-old female patient, complaining a history of poorly responsive bronchitic episodes and atrial fibrillation, underwent radiological work up after detection on January 2018 of a suspicious right upper lobe pulmonary lesion at chest X-ray. CT scan confirmed a right S1 irregular solitary nodule with signs of both mediastinal and parietal pleura involvement with concomitant multiple bilateral lymphadenopaties (stations 3, 4, 5) (February 2018). According to findings, an EBUS-TBNA bronchoscopy was performed on March 2018. The immediate postoperative period was uneventful as no intraoperative injuries, such as vascular or parenchymal ones, were reported. The hospital stay was uneventful and the patient was discharged on POD1. Twenty-four hours later, she was admitted to the Emergency Room Department due to the onset of relapsing episodes of haemoptysis. At admission, no impelling signs of cardiovascular impairment were reported (BP: 145/80 mmHg, HR: 88 beats per minute, T: 36.5 °C, SaO2: 95%), as far as neither laboratory nor radiology highlighted any suggestive element for post-procedural complication.

At a rapid worsening of patient’s clinical conditions requiring emergent oro-tracheal intubation, an urgent fibro-bronchoscopic evaluation showed the presence of an obstructive and non-viable subglottic formation with unsuccessful attempts of disobstruction till the onset of an irreversible cardio-circulatory arrest (Figure 1) due to acute respiratory distress and airway engorgement asphyxia. On autopsy, both lungs presented evident bloody polygonal areas alternating with compensatory emphysema ones. After en-bloc sampling of the airways, esophagus and heart, the section of the tracheal pars membranacea highlighted the presence of a blood clot that extended from the middle third of the tracheal lumen to the terminal bronchioles of both lungs (Figures 2,3).

Figure 1 Timeline from the onset of symptoms to the fatal event. 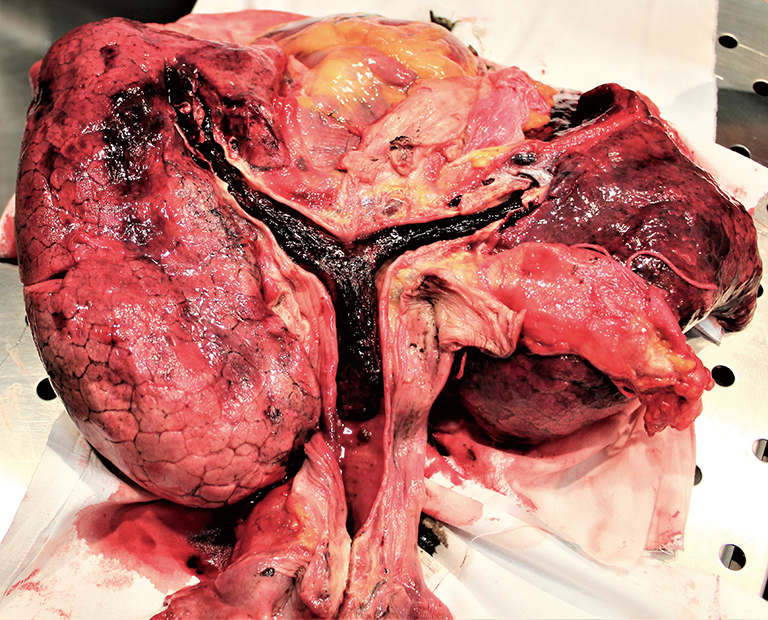 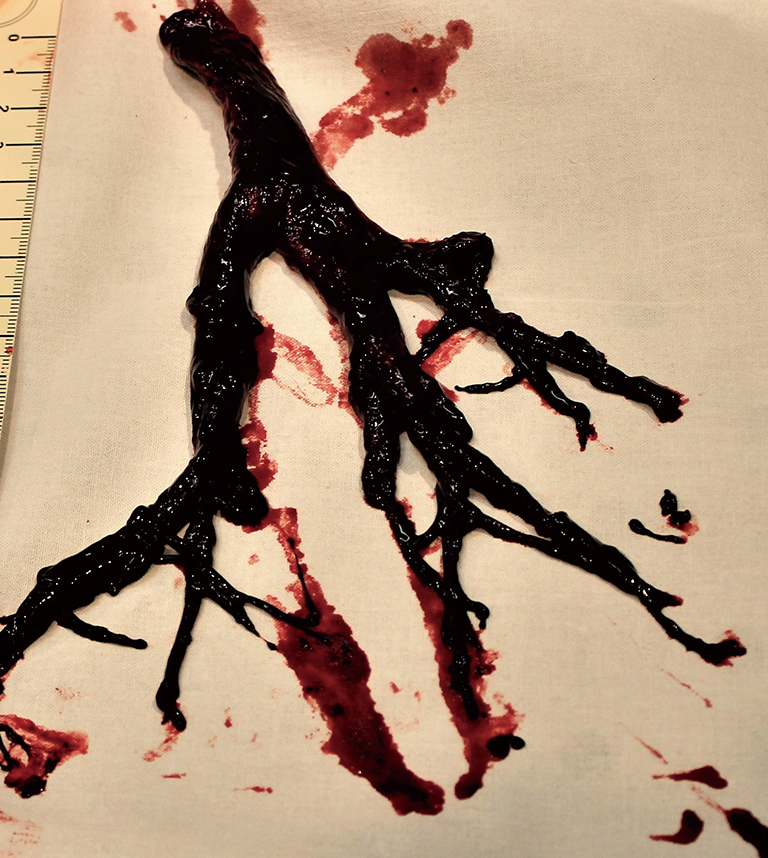 Figure 3 Detail of the mold clot involving the segmental and subsegmentary bronchial branches.

All procedures performed in studies involving human participants were in accordance with the ethical standards of the institutional and national research committees and with the Helsinki Declaration (as revised in 2013). No written informed consent has been obtained as anonymous data have been reported.

An accurate endoscopic evaluation represents an essential aspect in lung cancer staging in order to discern the extent of the lesion and any involvement of the hilar and mediastinal lymph nodes. In the setting of a clinical evaluation, therefore, interventional bronchoscopic techniques represent an essential resource that require adequate skills that have long opposed their adoption. On the other hand, some limitations such as anatomical reachability and the impossibility of a complete and exhaustive evaluation of the mediastinal lymph node compartment makes them complementary tools. But, in addition to evaluation purposes, bronchoscopy presents unparalleled peculiarities in the planning of the surgical strategy allowing to evaluate bronchial anatomy and avoid to enroll unjustified upfront surgery patients, who should be reserved for adjuvant protocols (2). Furthermore, related risks are undeniable. Post-operative complications include bleedings, cardiac arrhythmia, seizures, hypotension, myocardial infarction, pulmonary oedema, pneumothorax, oversedation, unplanned hospital admission and death (4). Several studies have investigated both the incidence and risk factors associated with EBUS-TBNA morbidity. Dhooria et al. (6), in a retrospective analysis on 1,004 subjects undergoing EBUS-TBNA under conscious sedation, reported an overall incidence of complications in 5.9% of patients. Notwithstanding majority of them ware minor or self-limiting, 1.1% experienced major adverse events and included respiratory failure requiring assisted ventilation, cardiac arrhythmias and hypotension. Postoperative mild or moderate bleeding was reported in 17 patients (1.7%), while no cases of massive haemoptysis was noted. Similarly, Evison et al. (7), enrolling 451 patients, showed only a 0.4% incidence of major complication (a case of self-limiting haemoptysis and a case of observation for postoperative hypoxaemia) upon 6.7% of overall morbidity rate.

Hemorrhagic adverse events will therefore appear somewhat rare in the cohort of endoscopic periprocedural complications, as reported by an exhaustive analysis of the American College of Chest Physician’s AQuIRE database (8). Authors reported only three cases of endobronchial bleedings (0.2%) and only one of them experienced massive bleeding with a fatal outcome. On the other hand, evidences provided by Asano et al. (9) suggest, in contrast to what has been previously reported, that bleeding complications represent the most common adverse events during interventional endoscopic procedures.

However, few cases of EBUS-TBNA related massive haemorrhage have been reported in literature. In a case series, Giesa et al. (10) described a case of a delayed massive hemoptysis. In another study (11), an early fatal massive haemoptysis in a patient with coagulation factors deficiency has been reported.

In our case, an EBUS-TBNA evaluation was performed only after a CT evidence of a suspicious pulmonary nodule and a fatal hemorrhagic event occurred after more than 24 hours from an uneventful procedure.

Moreover, although several studies report post-procedural complications, the optimal time for observation and discharge is still unclear claiming debate as early complications can occur up to seven days after the procedure. This aspect could be fundamental, mostly in high-risk patients, such as those undergoing anticoagulant regimens (4) which could benefit from a prolonged observation period.

According to this murky scenario, patients should be stratified according to their comorbidities as far as to their availability to gain rapid access to Emergency Department in the immediate post-operative period prior to schedule an endoscopic examination. Risk stratification could not disregard age, performance status, cardiac comorbidities (ischemic heart disease, heart rhythm disturbances), pulmonary comorbidities (chronic obstructing pulmonary diseases, fibrosis, history of previous pneumothorax), chronic liver diseases, choagulopaties and medications (especially anticoagulation regimens). A subset evaluation could stratify patient into three groups: low-risk patients amenable to one-day surgery observation without any postprocedural control (laboratory or radiological investigations); intermediate-risk patients amenable to one-day surgery observation with postoperative control and high-risk patients eligible for ordinary hospitalization with active post-operative instrumental and laboratory monitoring in a dedicated sub-intensive environment for at least 24 hours.

Reporting Checklist: The authors have completed the CARE reporting checklist. Available at http://dx.doi.org/10.21037/med-20-33

Conflicts of Interest: All authors have completed the ICMJE uniform disclosure form (available at http://dx.doi.org/10.21037/med-20-33). The authors have no conflicts of interest to declare.

Ethical Statement: The authors are accountable for all aspects of the work in ensuring that questions related to the accuracy or integrity of any part of the work are appropriately investigated and resolved. All procedures performed in studies involving human participants were in accordance with the ethical standards of the institutional and national research committees and with the Helsinki Declaration (as revised in 2013). No written informed consent has been obtained as anonymous data have been reported.