Over the past fifteen years, there has been an increasing use of video-assisted thoracoscopic surgery (VATS) and robotic-assisted thoracoscopic surgery (RATS) in the surgical treatment of thymomas (1). Some surgeons consider size over 5 cm as a contraindication for VATS thymectomy (2). However, some literature suggests that adequate oncologic resection can be achieved with minimally invasive surgery for tumor sizes larger than 3–5 cm without increasing complications (intraoperative capsular disruption) in experienced centers (3-5). Several previous publications have reported the excision of large thymomas using the robotic platform, however only a few publications have described the use of minimally invasive surgery for en bloc excision of the pericardium with mesh reconstruction. We present here a case report and associated video presentation of a robotic approach to a nearly 9 cm thymoma involving the pericardium and the right lung upper lobe, in accordance with the CARE reporting checklist (6) (available at http://dx.doi.org/10.21037/med-20-52).

The patient is a 58-year-old female with an incidental finding of an anterior mediastinal mass during a calcium score chest computed tomography (CT) scan. She did not have any symptoms associated with myasthenia gravis preoperatively, however she had positive acetylcholine receptor (AR) antibodies [AR modulating: 44 (elevated); AR blocking: <15 (normal); AR binding 1.91 (elevated)]. Her chest CT scan reported an anterior mediastinal mass measuring 3.9 cm × 5.2 cm × 8.2 cm, in the anteroposterior, transverse, and cranio-caudal dimensions respectively (Figures 1-3). 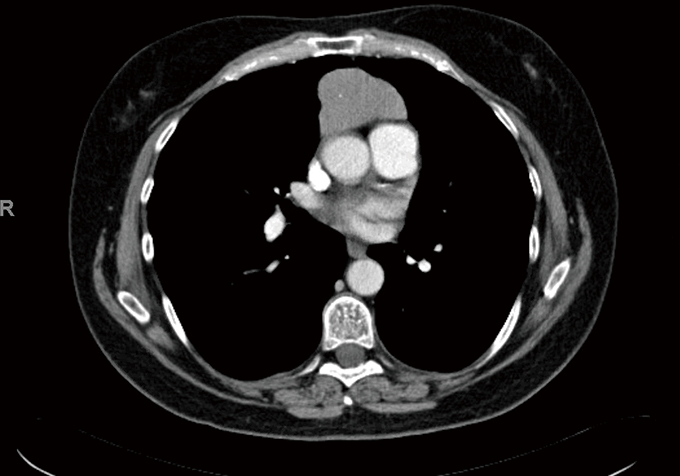 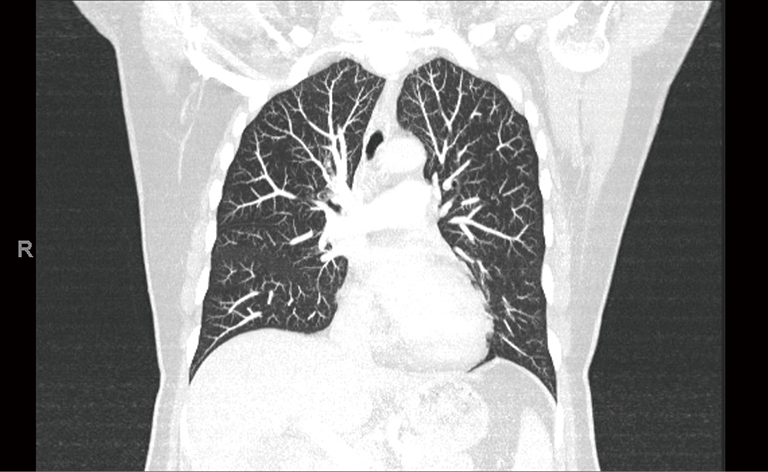 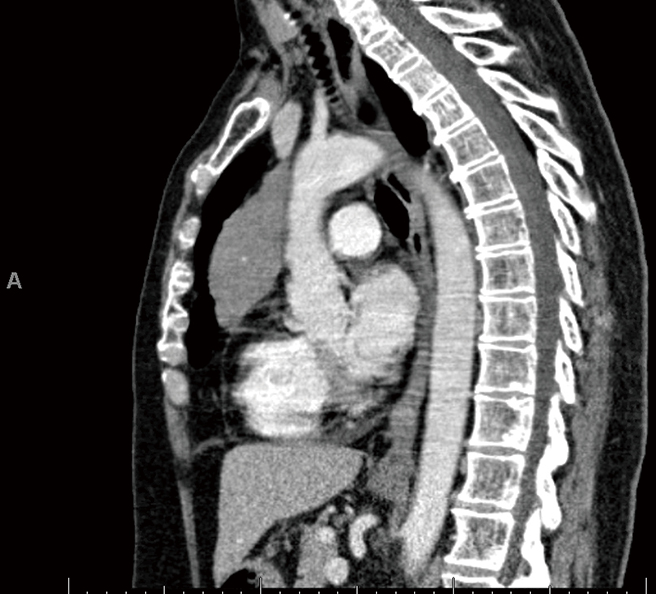 The right lung was attached to the anterior aspect of the mediastinal mass and was separated with green loads of the robotic stapler. A bipolar dissector was used to incise the anterior mediastinal pleura medial to the right internal mammary vessels and division was extended to reach the left internal mammary vessels. Thymic tissue was subsequently dissected off the innominate vein and the draining thymic veins were divided with the vessel sealer. The tumor was then resected en bloc with a segment of pericardium, which was firmly adherent to the tumor. The specimen was removed using an Anchor bag (Anchor Products Company, Addison, Illinois) with the capsule intact. Upon further exploration, there appeared to be no further thymic tissue remaining. The pericardial defect was reconstructed using a Gortex preclude pericardial membrane sutured with non-absorbable 0 V-loc suture; the membrane was fenestrated with robotic scissors to prevent tamponade in case of unrecognized bleeding. A right chest tube was placed. Video 1 highlights key portions of the case including the thymic and pericardial resection and pericardial reconstruction.

The pathology report indicated a WHO type B2 9.0 cm thymoma with negative resection margins; all 6 mediastinal lymph nodes removed were negative for malignancy. The patient did well post operatively and had an uneventful course. The patient was discharged on post-op day 3 in stable condition. Her CT scan 6- and 12-month post-operatively did not demonstrate any evidence of recurrence. The patient developed moderate diplopia 5 months postop and was treated with pyridostigmine (30–60 mg every 4 hours) for myasthenia gravis by a neurologist at our institution; she is currently asymptomatic, and she has weaned off and stopped her pyridostigmine. All procedures performed in studies involving human participants were in accordance with the ethical standards of the institutional and/or national research committee(s) and with the Helsinki Declaration (as revised in 2013). Written informed consent was obtained from the patient.

Technological advances in thoracic surgery have enabled the increasing use of video-assisted and robotic-assisted surgery to perform thymectomy. Frequently cited benefits of robotic surgery for thymectomy include improved visualization of the gland and nearby structures, tremor reduction, decreased hospital length of stay (LOS), and better patient pain control (7).

The earliest report of a robotic thymectomy was in 2003 for a 28-year-old male with myasthenia gravis (8). Since then, a significant increase in utilization of robotic thymectomy has been reported. Burt et al. in their query of the National Cancer Database (NCDB) between 2010 and 2014 noted a doubling in the percentage of patients treated by minimally invasive thymectomy (MIT) (21.0% in 2010 to 40.2% in 2014, P<0.001). They reported in their MIT group, a robotic approach accounted for 59.7% of cases (9).

In an attempt to avoid compromising oncologic outcomes with the increasing use of minimally invasive surgery, the International Thymic Malignancy Interest Group (ITMIG) established a precedent of nine principles for MIT. These include avoiding rib spreading or sternal cutting; ensuring a complete resection including the thymoma, thymus, and mediastinal fat; dissection and visualization of bilateral phrenic nerves and innominate vein; conversion to open if oncologic principles are at risk of being violated; an appropriate access incision size to prevent disruption of specimen; appropriate exploration of pleura if there is pleural involvement; retrieval of specimen in bag and evaluation of removed mass for completeness of resection; and communication with pathologist for suspicious areas, well demarcated tissue orientation, and areas of tissue disruption (10).

Critically, comparisons of R0 resections have been performed for open vs. MIT. Burt et al. analyzed an international thymectomy registry in 2017: the open (OT) approach (sternotomy or thoracotomy) was utilized in 2,053 (82%) patients while MIT (VATS or RATS) was used in 416 patients (18%). The rate of R0 resection was 86% and 94% (P<0.001), respectively. This discrepancy, however, disappeared after propensity matching, which included variables such as geographic continent, time period, age, sex, paraneoplastic syndrome, WHO histologic type, Masaoka stage, tumor size, extent of thymectomy, and use of chemotherapy and radiotherapy; completeness of resection was not included (7). Notably, there was a higher rate of R1 and R2 resection in North America as compared to Asia; in a separate NCDB analysis by Burt et al. they noted a similar trend and attributed the continental differences to the relatively early experience of MIT in North America at that time. Rates of R0 resection increased over time (9). In their 2019 analysis of the NCDB, Burt and colleagues again found R0 resection was independent of surgical approach (P=0.17) and MIT was associated with significantly shorter LOS (−1.03 days, 95% confidence interval (CI): −1.68 to −0.38) (9). More recently, Yang et al. performed a propensity-matched analysis of open versus MIT for stages I to III thymoma using the NCDB. Their propensity match included age, sex, race, education, facility type, insurance, Masaoka stage, tumor size and histology, induction therapy, and year of diagnosis; they reported shorter hospital LOS for MIT (3 vs. 4 days, P<0.01) and no significant differences in margin positivity (P=0.84), 30-day readmission (P=0.28), 30-day mortality (P=0.60), and 5-year survival (89.4% MIT vs. 81.6% open, P=0.20). Their subgroup analysis of tumors <4 cm and tumors >4 cm also demonstrated no significant differences in margin positivity or overall survival. When robotic vs. VATS thymectomies were compared in the propensity-score analysis, there were no differences in LOS, perioperative outcomes, or overall survival (11).

Long term survival outcomes and risk of recurrence are difficult to assess as patients have long disease-free survivals (~10 years) after thymectomy for thymoma. As such, MIT studies have relatively short follow-up intervals. The Japanese Association for Research on the Thymus (JART) has performed the longest follow-up after MIT. After propensity matching patients with Masaoka stage I and II thymomas, median sternotomy (OT) and VATS thymectomy resulted in similar 5-year overall survival (OT =97.1% vs. VATS =97.0%) and recurrence free survival (OT =95% vs. VATS =93.9%) (12).

There has been a recent focus on larger thymomas that were historically contraindicated for robotic thymectomy. Wilshire and colleagues performed a single-center retrospective review of patients who underwent a robotic vs. sternotomy approach for thymomas greater than 3 cm between 2004 and 2014 and found R0 resection was statistically equivalent (91% robotic and 88% open, P=0.932) and robotic surgery associated with shorter chest tube duration (1 vs. 3 days, P=0.001, respectively), intensive care unit (0 vs. 1 day, respectively P=0.024) and hospital LOS (2 vs. 5 days, P<0.001) (5). Kneuertz and coworkers similarly conducted a retrospective, propensity-matched analysis based on age, sex, tumor size, and Masaoka stage for large (>4 cm) thymomas via robotic and transsternal approaches. They reported no difference in R0 resection rates between robotic (90%) and transsternal (85%, P=0.62) techniques (4).

A few cases of robotic thymectomy requiring pericardial reconstruction have been reported in the literature. The thoracic group at the University of Pittsburg presented a similar case report for a 7 cm thymoma; they report en bloc resection of the mass along with pericardium and lung tissue for thymic squamous cell carcinoma. They employed TilePro software in order to enhance visualization of the phrenic nerve. Similarly, a 10 cm × 10 cm pericardial defect was reconstructed with polytetrafluoretylene (Gore-Tex, Newark, DE) membrane patch and small cuts were made in the pericardial patch to allow for fluid drainage (15). The robotic platform allows for a facile reconstruction of pericardium (16). Various reports included use of a vented Gore-Tex patch for pericardial reconstruction, interrupted vs. running sutures, and suture type (proline vs. V-Loc) varied by institution (15,17). The thoracic department at University of North Carolina reported routinely reconstructing pericardial defects greater than 3 cm × 3 cm (18).

Our patient kindly shared the following thoughts on her pre-, peri-, and post-operative experience: “My thymoma was found incidentally on a CT Calcium score of my heart ordered by my cardiologist. Once the thymoma was identified I was referred to a thoracic surgeon for removal. When I met the thoracic surgeon, Dr. Villamizar, for the first time, he explained that most surgeons would not attempt to remove a thymoma as large as mine robotically, but that he had experience with this approach and felt confident that he would be successful. The robotic removal would be less invasive with less downtime, easier recovery, less painful and less scarring were all factors that I considered when choosing the robotic route. My surgery was more difficult and more complicated than originally thought, as the thymoma was larger and more involved than was anticipated. Nonetheless, because of the surgeon’s tenacity and experience, he was successful in removing the tumor robotically. I stayed a total of three days in the hospital. I stopped taking pain medication, other than ibuprofen, the day I came home… [and continued to use ice packs and rest thereafter]. Despite still having some discomfort […] after surgery, I believe that the robotic approach was the right choice for me. [I wonder] how much more pain might I have if the traditional thoracotomy had been necessary?”

Robotic thymectomy continues to gain international acceptability across North America, Europe, and Asia. MIT has been associated with equivalent oncologic R0 resection rates while decreasing post-operative complications and pain requirements. Survival outcomes at 10 years are still under investigation. Our group and others have demonstrated that in experienced hands, the robotic approach is safe and has oncologic equivalence to median sternotomy for tumors larger than 5 cm in size, even if associated with invasion of surrounding structures. The type of approach should not compromise oncologic principles of achieving R0 resection; surgeons with inadequate experience should not attempt a complex thymectomy robotically if there is a significant risk of disrupting the capsule or performing an incomplete resection. There should be no hesitation for conversion to open if deemed necessary to preserve oncologic principles.

The authors would like to thank the University of Miami for support in writing this manuscript.

Reporting Checklist: The authors have completed the CARE reporting checklist. Available at http://dx.doi.org/10.21037/med-20-52

Conflicts of Interest: All authors have completed the ICMJE uniform disclosure form (available at http://dx.doi.org/10.21037/med-20-52). The authors have no conflicts of interest to declare.

Ethical Statement: The authors are accountable for all aspects of the work in ensuring that questions related to the accuracy or integrity of any part of the work are appropriately investigated and resolved. All procedures performed in studies involving human participants were in accordance with the ethical standards of the institutional and/or national research committee(s) and with the Helsinki Declaration (as revised in 2013). Written informed consent was obtained from the patient.