In the last two decades, anatomical resection (lobectomy or segmentectomy) performed with video-assisted thoracoscopic surgery (VATS) has consolidated as treatment of choice for early stage cancer: this minimally invasive approach, performing from one to three ports, guarantees a radicality equal to the open technique but differentiating from the latter for better outcomes in terms of post-operative pain, reduced complications, less length of stay and, not least, lower costs (1-3).

The most fearful complication during the procedure is the vascular injury which very often requires conversion to thoracotomy when the bleeding is of such entity that it cannot be controlled in VATS (4).

As the learning curve of surgical team progresses, the conversion rate drops significantly (5,6) but the occurrence of bleeding is always possible, even for an experienced surgeon.

In literature, multiple techniques have been described to treat vascular injury without resorting to thoracotomy, of which one of the major contributions has been made by Guo et al. (7); the author has exemplified three types of approach to repair the vessel, according to the extent of the lesion.

Whatever the type of repair, all VATS lobectomy experts agree on the same message: when a vascular injury occurs, the first step is to compress and not panic.

This allows you to gain the time needed to think and elaborate the next step (8).

With this case report, we want to contribute to this topic still in need of more surgical options that could avoid conversion to thoracotomy but that can safely resolve the bleeding.

Our technique permits to achieve the sealing of the vascular lesion without performing any angiorrhaphy.

The application of hemostatic matrix sealant agent is easy to perform even by inexperienced surgeons and does not require any special training.

When compared to angiorrhaphy technique executed by surgeons still in learning curve, this approach sensibly shortens the time of bleeding management.

We present the following case in accordance with the CARE Reporting checklist (available at http://dx.doi.org/10.21037/med-20-45).

A 63-year-old female patient referred to our Thoracic Surgery Unit with a CT findings of nodular formation of 19 millimetres with spiculated borders. The patient complained chest pain and dyspnoea (ECOG performance status: 1).

Her medical history included hypertension, bilateral saphenous varix treated with saphenectomy, and myocardial infarction treated with angioplasty and stenting 5 years ago. She also reported to be a smoker for almost 40 years. No familiarity for neoplasm was reported.

We carried out a percutaneous transthoracic CT guided biopsy of the lung lesion, resulting positive for adenocarcinoma.

A PET scan ruled out the presence of lymph node or extra-thoracic metastasis. A pre-operatory stage of T1b N0 M0 was then assigned.

Due to her comorbidities, the patient was accurately screened for surgery, performing lung functional tests and cardiological examination.

Predicted postoperative values of FEV1 and TLCO was respectively 73% and 69%, confirming a lung function fit for a lobectomy.

Echocardiography showed an ejection fraction of 60%, no signs of akinesia/hypokinesia or valvulopathy, and a pulmonary artery pression of 30 mmHg.

However, due to the presence of coronary stent, anti-platelets drugs could not be discontinued.

An ASA score of III was then assigned.

The patient underwent a right upper VATS lobectomy using an anterior approach with three ports (Video 1); a 4-cm anterior utility incision was made, applying a soft tissue retractor (Alexis Retractor, Applied Medical, USA). Two more 1 cm incisions were then performed at the level of the top of the diaphragm, for camera and surgical instruments.

We then proceeded to open the fissure, identifying an intrascissural upper lobe artery (Figure 1). 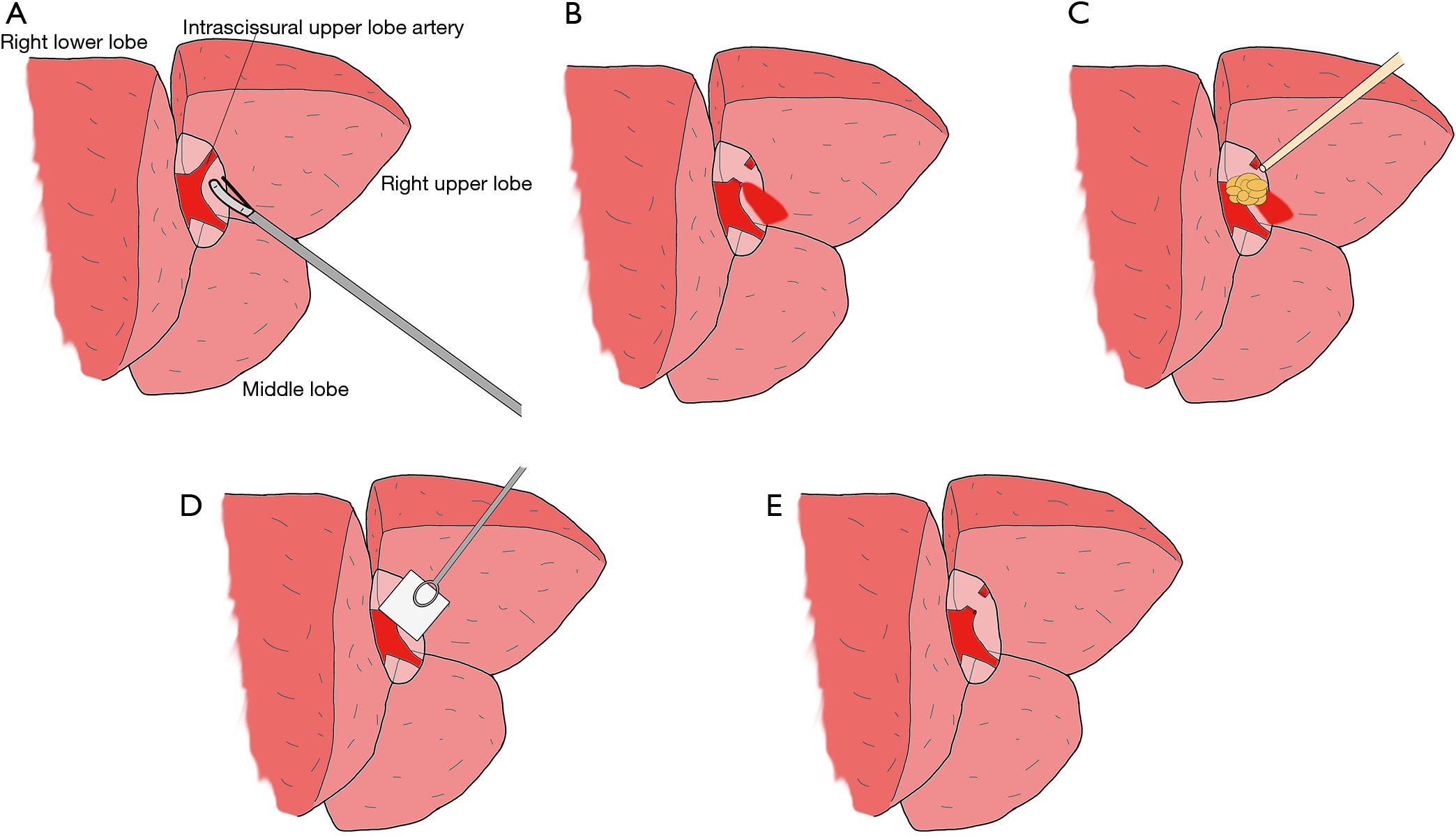 During the preparation of the artery, we accidentally injured this vessel, bringing to a conspicuous bleeding in the operatory field.

After applying suction to clean the field and localize the damage, we used another 35 mm reload to staple the vessel.

The stapler could not effectively close the breach in the vessel, so we applied clips to achieve haemostasis.

Unfortunately, the not optimal vision prevented us to correctly position the clips, leading to persistence of bleeding.

We then applied a hemostatic matrix sealant agent (FloSeal; Baxter Inc, Deerfield, IL) and a compression of the vessel with a swab, in order to gain time to elaborate an emergency plan.

After 3 minutes, the swab was removed to revaluate the damage and we noted that the bleeding was decreasing.

The blood volume in the suction pump was still acceptable (100 mL) so we opted for a further application of FloSeal and a subsequent 3 minutes compression.

The vessel injury was then sealed with no evidence of residual bleeding, allowing us to safely complete the lobectomy without conversion. After fixing the lesion, no resumption of bleeding was observed and no adverse events occurred (Figure 2).

Figure 2 The timeline summarizes the various steps leading to the successful repair of vascular injury.

After the surgical procedure, the patient was admitted to intensive care unit due to her comorbidity, being discharged after 24 hours.

In the post-operative days (POD), we carefully monitored blood count and the chest drainage; we highlighted a small reduction of haemoglobin (10.5 mg/dL in POD 1 versus a pre-operatory value of 13.5 mg/dL), with a sieroematic fluid collected by the drainage (POD 1: 320 mL, POD 2,250 mL, POD 3,210 mL).

During the entire peri-operative time, anti-platelets drug was never suspended and daily cardiological examination was carried out. The postoperative course was smooth and without unanticipated events, so chest tube was removed on the fourth POD and the patient was discharged on the 5th day.

The final histology of the surgical sample was invasive adenocarcinoma, with a pT1b N0 M0 (Stage IA2); no adjuvant therapy was administered to the patient and after 6 months since operation she was alive and with no signs of relapse.

All procedures performed in studies involving human participants were in accordance with the ethical standards of the institutional and national research committees and with the Helsinki Declaration (as revised in 2013). Written informed consent was obtained from the patient for publication of this manuscript and any accompanying images.

Vessel injury in VATS is a dreadful event that could lead to an increased morbidity or even the death of the patient.

A conspicuous bleeding can hinder the field of view, therefore making it difficult to locate the vascular lesion and treat it.

The first step on which everyone agrees is to compress the vessel and apply suction in order to clean the field; with these simple gestures, the surgical team could gain the time necessary to elaborate an appropriate plan (8).

Sometimes the bleeding could be so threatful that a thoracotomy is mandatory. Conversion is still considered by many authors a therapeutic option and it should not be accounted as a surgeon’s failure (9).

In fact, the safety of the patients should always be kept as primary focus, putting in place all the necessary procedures to preserve it.

However, when a vascular injury can be easily detected and controlled, a mini-invasive repair should always be attempted.

Guo et al. (7) described three different approaches, based on the suction-compression angiorrhaphy technique (SCAT); while for small wound a suction-compression approach allows to repair it with suture, for greater lesions is useful to clamp the vessel with an Allis or a releasable Bulldog clamp.

Minervini et al. (10) provided useful advice based on their when managing a pulmonary artery (PA) injury with SCAT, suggesting to mobilize the PA and clamp it with a sponge stick instead of using forceps.

The vascular repair can be achieved in multiport VATS as well as in the uniportal VATS, especially in centres with high numbers of cases (11).

The case we described offers an approach without direct suture, making it a suitable option even for a surgical team still in the learning curve.

While starting with the suction-compression approach, we try to seal the lesion taking advantage of the blood clotting mechanism applying a haemostatic matrix product.

These procedures can be applied when the injury is of few millimetres and with smooth margins. In our opinion, wider lesions are not susceptible of this type of repair and must be approached with a more advanced technique such as suction-compression angiorrhaphy to achieve a safe closure of the wound.

One of the hindrances that have to be mentioned is the opposing action of bleeding: in presence of a high flow, the Floseal application could be difficult. Thus, is recommended to keep on site the suction and to apply compression with a swab as soon as possible after instillation of the sealant.

The surgeon should pay special attention to the blood loss, renouncing to this type of approach when the volume of blood suctioned is very high. In the case reported, we set in our mind 200 millilitres of blood loss as a cut off before giving up this approach and switching to a more complex repair.

Moreover, the closure attempt with a stapler should have been avoided because the view was suboptimal, postponing it after the completion of wound sealing.

The limit of the technique we propose is related to the size and localization of vessel wound; this approach is helpful on small lesions, preferably located on proximal stump after stapling when a suture could be difficult or even worsen the injury.

Our approach is also useful to slow down the bleeding, granting the surgeon enough time to elaborate a more complex repair plan without threatening patient’s life.

Vessel repair in VATS lobectomy could be sometimes difficult, even for poor vision or for tricky lesion localization.

Also, since more and more surgeons are joining the mini-invasive approach, the rate of vascular injury could be high. The evidence in literature regarding managing of this complication are useful but still few. While SCAT is considered the primary choice to deal with bleeding, we want to offer a reliable alternative when the wound size is small and the suturing could be problematic.

However, since the data we report are based on a single case, further studies are required to corroborate our findings.

Reporting Checklist: The authors have completed the CARE reporting checklist (available at http://dx.doi.org/10.21037/med-20-45).

Conflicts of Interest: All authors have completed the ICMJE uniform disclosure form available at http://dx.doi.org/10.21037/med-20-45. The authors have no conflicts of interest to declare.

Ethical Statement: The authors are accountable for all aspects of the work in ensuring that questions related to the accuracy or integrity of any part of the work are appropriately investigated and resolved. All procedures performed in studies involving human participants were in accordance with the ethical standards of the institutional and national research committees and with the Helsinki Declaration (as revised in 2013). Written informed consent was obtained from the patient for publication of this study and any accompanying images.