Approximately 10% patients with newly diagnosed non-small cell lung cancer (NSCLC) present with metastases in the ipsilateral mediastinal lymph nodes (LN). Optimal treatment of these patients is still a matter of debate. They may undergo definitive chemoradiotherapy or surgery after neoadjuvant therapy, with similar outcomes reported in randomized trials comparing both modalities (1,2). While persistent N2 disease after neoadjuvant chemotherapy or chemoradiotherapy heralds poor prognosis, outcome after surgery is good in the subset of patients with mediastinal nodal downstaging. Thus, precise restaging method after induction therapy is of paramount importance for selection of proper treatment for patients. However, there is no standardized approach for the restaging of the mediastinum. As the imaging techniques like CT or PET/CT are characterized by low diagnostic yield, tissue sampling is necessary for the accurate determination of mediastinal LN status (3,4). Although minimally invasive approaches like endobronchial ultrasound-guided transbronchial needle aspiration (EBUS-TBNA) and transesophageal endoscopic ultrasound-guided fine needle aspiration (EUS-FNA) allow for the cytologic examination of the mediastinal LN samples, their negative predictive value is low and tumor-negative findings should be confirmed by surgical staging to avoid futile thoracotomy (5).

In 2004, transcervical extended mediastinal lymphadenectomy (TEMLA) was introduced (6). It is a surgical exploration of mediastinum with high sensitivity for detecting mediastinal LN metastases. In this retrospective study, we report our results of the surgical treatment of N2 patients after induction treatment and negative result of mediastinal restaging with TEMLA.

This study was approved by our Institutional Review Board (approval no 1/2019). We have retrospectively analyzed hospital medical data of all 167 NSCLC patients who underwent induction chemotherapy or chemoradiotherapy and restaging with TEMLA from 1st January 2007 to 31st December 2013. All patients initially underwent CT and EBUS/EUS after completion of induction treatment. Only those diagnosed with stable disease or remission and with negative EBUS/EUS proceeded to final restaging with TEMLA. TEMLA allowed to discover persistent metastatic mediastinal LN involvement in 44 patients (26.3%); these patients were disqualified from surgery and referred to further definitive oncological treatment. Of 123 patients without nodal involvement in TEMLA, 106 underwent subsequent thoracotomy with pulmonary resection and completion systematic nodal dissection. Pulmonary resection was not performed in 17 patients: 5 patients underwent explorative thoracotomy, 5 were disqualified due to poor functional status, 4 patients waived from further surgical treatment, in 2 disease progressed and 1 patient died before pulmonary resection due to myocardial infarct. Of patients who proceed to pulmonary resection, 48 underwent neoadjuvant treatment due to histologically confirmed or radiologically evident N2 disease and 58 patients due to other reasons, mainly to downsize locally advanced central tumours with borderline resectability (Figure 1). The patients from the former group are the subjects of this study. There were 12 women and 36 men in the age range 46–75 (mean 58.3) years. There were 28 squamous cell carcinomas, 13 adenocarcinomas, 1 mixed carcinoma and 6 NSCLCs. Among these patients, 24 underwent neoadjuvant chemotherapy, 23 chemoradiotherapy and 1 chemotherapy with brachytherapy. The diagnosis of N2 metastatic involvement before neoadjuvant chemotherapy was confirmed with the positive results of pathologic staging in 38 patients (37 EBUS-TBNA/EUS-FNA, 1 mediastinoscopy). In 8 patients, the diagnosis of N2 disease was based on the results of chest CT showing enlarged mediastinal LN. In 2 patients with locally advanced central tumours N2 disease was missed during both initial work-up and restaging with TEMLA and was discovered at completion lymphadenectomy during thoracotomy. At that time, PET/CT scan was not routinely performed in all patients. All patients were followed-up until death or for at least 60 months after thoracotomy. 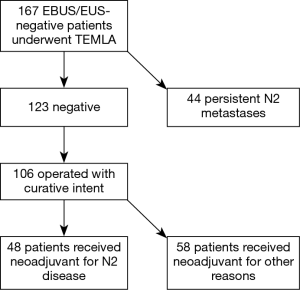 The technique of TEMLA was described in details elsewhere (6). Briefly, access to the mediastinum was gained through the collar incision in the neck and elevation of the sternal manubrium with a retractor. The mediastinal nodal stations 1, 2R, 4R, 2L, 4L, 5, 6, 7 and upper 8 were radically dissected. Most of the procedure was performed in the open fashion, with the subcarinal and the perioesophageal nodes (stations 7 and 8) removed in the mediastinoscopy-assisted technique and the para-aortic and the pulmonary-window nodes (stations 6 and 5) removed in the video-assisted thoracic surgery (VATS), with the videothoracoscope inserted through the transcervical incision. In general, the mediastinal pleura was not violated and no drain was left in the mediastinum. Pathological examination was performed on all harvested mediastinal LN after a standard haematoxilin/eosin staining.

Differences between cohorts were evaluated using a chi-square test or the Student’s t-test. Overall survival was determined as the time from pulmonary resection to death from any cause and was assessed using Kaplan-Meier method and log-rank test. The difference was considered to be significant at P<0.05. All data analyses were performed using Statistica 64 (ver. 12.5.192.0, StatSoft Inc.) and Prism 5 (GraphPad Software Inc.).

All surgical resections were anatomic and included completion mediastinal LN dissection. There were 32 right-sided resections including 18 pneumonectomies, 2 lower bilobectomies and 12 lobectomies (9 upper, 3 lower). There were 16 left sided resections, including 11 pneumonectomies and 5 lobectomies (2 upper, 3 lower). R0 resection was achieved in 46 patients, while 2 patients had R1 resection (both after right pneumonectomy). Pathological examination of LN obtained during pulmonary resection revealed persistent metastatic N2 nodes in 5 patients and positive N1 nodes in 4 patients. 12 patients showed complete pathological response (CPR) to the induction treatment. CPR in the chemotherapy group was 8.0%, significantly lower than 43.5% in the chemoradiotherapy group (P=0.007). The only complication after TEMLA was bilateral vocal cord paralysis observed in 1 patient (2.1%). 2 patients died in early postoperative period due to bronchial fistula (4.2%), 1 after right pneumonectomy and 1 after lower bilobectomy. There were 5 bronchial fistulas (4 after right pneumonectomy, 1 after lower bilobectomy) and 1 empyema without fistula after right pneumonectomy. Overall 5-year survival of patients operated after negative TEMLA (including false negative results) was 39.5% (Figure 2) and was similar in patients with N2 disease diagnosed on the basis of LN cytology or radiology alone. Overall 5-year survival was not statistically different in patients who underwent lobectomy/bilobectomy and in patients who underwent pneumonectomy (47.4% vs. 34.5%, P=0.5, Figure 3). Overall 5-year survival was significantly lower in patients after chemoradiotherapy than in patients after chemotherapy alone (21.7% vs. 56.0%, P=0.022, Figure 4). Overall 5-year survival was not statistically different in patients with true mediastinal downstaging and in patients with false negative TEMLA (41.9% vs. 20%, P=0.19, Figure 5). 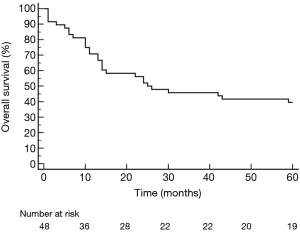 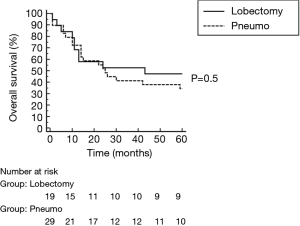 Figure 3 Overall survival of patients who underwent lobectomy/bilobectomy vs. pneumonectomy. 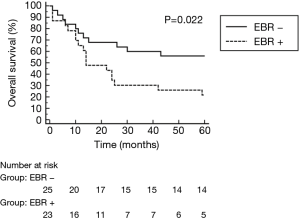 Figure 4 Overall survival of patients after chemotherapy vs. chemoradiotherapy. 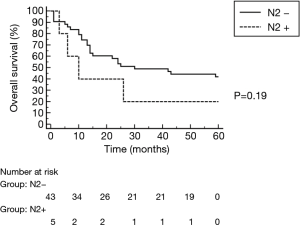 In this retrospective analysis, we evaluated the outcomes of N2-positive stage IIIA NSCLC patients who were treated with induction chemotherapy or chemoradiotherapy followed by pathological mediastinal restaging with TEMLA and pulmonary resection in case of negative results of restaging. We showed that this group of patients had good overall 5-year survival of 39.5%.

Numerous studies based on pathological examination of specimen obtained during pulmonary resection have shown that mediastinal nodal clearance following induction therapy was associated with good survival, while persistent N2 disease was a predictor of a poor prognosis after curative-intent surgery (7-10). Overall 5-year survival of patients with no mediastinal nodal metastases in postoperative specimen after neoadjuvant treatment may be as high as 49% (10) and is dependent on several factors, like radicality and type of surgery, tumour histology or preinduction extent of nodal involvement. However, there is little data reporting long-term survival of patients selected for surgery on the basis of the results of mediastinal restaging. In a study by Yang et al., patients who underwent surgical mediastinal restaging after chemotherapy ± radiotherapy and prior to lobectomy had better prognosis than patients who proceeded to surgery without restaging (11). Restaging procedures were heterogenous and included mediastinoscopy, VATS or thoracotomy and overall 5-year survival after negative restaging procedure and pulmonary resection was 45.2%. However, only patients who underwent lobectomy were included in the analysis. In our cohort, 60.4% patients were treated with pneumonectomy. The large number of pneumonectomy procedures in this series is typical for this stage (12). Although we were not able to show significant difference in outcomes between patients treated with pneumonectomy and lobectomy in our relatively small cohort, pneumonectomy was reported to be a factor negatively affecting survival in N2 patients after induction therapy. That fact may explain slightly lower long-time survival in this series, as compared to results reported (13).

Although several different methods may be employed for mediastinal restaging after neoadjuvant treatment, like imaging, endoscopy or surgery, none is considered to be a standard. To balance diagnostic accuracy with invasiveness of restaging, our approach was to combine different restaging methods. After completion of induction treatment, patients with stage IIIA-N2 NSCLC underwent imaging studies to evaluate possible systemic progression of the disease. If a patient had no signs of distant metastases in CT or PET/CT scan, endoscopic ultrasound (EBUS/EUS) was our initial procedure for restaging of the mediastinum. EBUS/EUS was reported to be a good test to confirm mediastinal LN metastases and avoid futile surgical mediastinal exploration (5). However, because of the low negative predictive value of EBUS/EUS, tumor-negative findings needed be confirmed by surgical staging before thoracotomy. We have previously shown that diagnostic yield of TEMLA in restaging of NSCLC was very high and superior to mediastinoscopy, EBUS/EUS and PET/CT (19). Although the procedure was more technically demanding after induction treatment, especially chemoradiotherapy, it was feasible in every patient. Restaging remediastinoscopy was reported to be of limited feasibility (15). However, in our series, TEMLA was a second transcervical surgical exploration of the mediastinum in 1 patient only. As TEMLA was complicated in only one patient—with a bilateral vocal cord paresis—it proved to be a safe restaging procedure. Despite the complication, the patient underwent subsequent uneventful lobectomy.

The results presented here indicate that surgical treatment following restaging with TEMLA was safe. With pneumonectomy being the most common surgical procedure performed, postoperative mortality was at acceptable level (4.2%). As long-term survival was similar in patients who underwent pneumonectomy or lesser resections, we cannot agree with other studies suggesting that pneumonectomy should not be performed after induction treatment (1,8).

In this series, patients treated with induction chemotherapy had better prognosis than those after chemoradiation, what was an unexpected finding. Other studies, including randomized trials and meta-analyses, showed that long-term survival was similar in patients operated after neoadjuvant chemotherapy or chemoradiotherapy (20). However, when selection for pulmonary resection was based on the negative results of invasive mediastinal restaging, patients after induction chemotherapy had better prognosis (11). This may be explained by the local effect of chemoradiotherapy on the metastatic mediastinal LN, possibly obscuring results of mediastinal restaging. The survival benefit seen with mediastinal downstaging is consistent with the hypothesis, that the absence of mediastinal LN involvement is an accurate marker for the eradication of systemic disease. As chemoradiotherapy have strong local effect on mediastinal LN, their metastatic status might no longer be reflection of systemic micrometastases. There also may be other possible explanations, like higher number of patients with more locally advanced disease in the induction chemoradiation group in this retrospective series.

In conclusion, NSCLC patients with N2 disease who underwent pulmonary resection after induction treatment and negative mediastinal restaging with TEMLA showed good long-term survival. In these patients aggressive surgery, including pneumonectomy, lead to satisfactory outcomes. However, prognosis of patients after induction chemoradiotherapy was worse.

Provenance and Peer Review: This article was commissioned by the Editorial Office, Mediastinum for the series “Mediastinoscopic Surgery” published in Mediastinum. The article has undergone external peer review.

Conflicts of Interest: Both authors have completed the ICMJE uniform disclosure form (available at http://dx.doi.org/10.21037/med.2019.09.01). The series “Mediastinoscopic Surgery” was commissioned by the editorial office without any funding or sponsorship. MZ serves as the unpaid Guest Editor of this series. The authors have no other conflicts of interest to declare.

Ethical Statement: The authors are accountable for all aspects of the work in ensuring that questions related to the accuracy or integrity of any part of the work are appropriately investigated and resolved. The study was conducted in accordance with the Declaration of Helsinki (as revised in 2013). This study was approved by our Institutional Review Board (approval no 1/2019) and written informed consent was obtained from all patients.