Case presentation and recommendations from the April 2018 ITMIG tumor board: an international multidisciplinary team

The International Thymic Malignancy Interest Group (ITMIG) is an academic society that has periodic virtual tumor board meetings to discuss challenging cases. The tumor board is composed of a moderator and at least one each of the following clinicians; thoracic surgeon, medical oncologist, radiation oncologist, diagnostic radiologist, and thoracic pathologist. Cases and clinical questions are submitted by treating clinicians to get an expert opinion from multiple specialists, all with significant interest and experience in thymic malignancies. Following the case discussion, the tumor board summarizes its conclusions in writing for the treating clinician to help guide them in their treatment plan. We present a case discussed at our virtual tumor board that was conducted in April 2018.

An 11-year-old female who was previously healthy presented to her local Emergency Department with a one-week history of pain behind her left scapula and subjective low-grade fever. She had no respiratory or constitutional symptoms, no history of facial flushing, and an unremarkable physical exam. The patient’s past medical history includes a tonsillectomy more than 5 years prior following multiple febrile episodes, up to date immunizations, no medications, and there was no other contributing history. Her family history includes her mother being a BRCA1 carrier and diagnosed with breast cancer before the age of 50, a maternal cousin with juvenile rheumatoid arthritis, and her father is a hemoglobin C carrier.

A chest radiograph obtained during her initial visit to the emergency department demonstrated a prevascular mediastinal mass. The patient was referred to the local pediatric hospital where she was admitted for additional work-up. To further investigate the mediastinal mass, a contrast-enhanced chest computed tomography (CT) was obtained. The diagnostic radiologist on the tumor board reviewed this imaging. The chest CT demonstrates a mass and normal thymus in the thymic bed. While the right lobe of the thymus is normal, a mass arises and replaces most of the left lobe (Figure 1A). The size of the mass is approximately 6 cm with a peripheral rim of soft tissue similar in density to muscle. However, the center of the mass is of low attenuation, likely due to some necrosis or cystic change. There is also a 2 mm calcification at the periphery of the lesion (Figure 1B). There is no lymphadenopathy or pleural nodularity and aside from scoliosis, the rest of the study is normal. 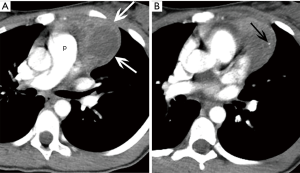 Figure 1 Contrast enhanced chest CT at presentation. (A) Axial image at the level of the main pulmonary artery [p] reveals a prevascular mass (white arrows) replacing the left lobe of the thymus with a low attenuation center. (B) There is a dense 2 mm calcification (black arrow) at the periphery of this mass.

These imaging findings would be most consistent with a thymoma although rare in the pediatric age group. The appearance is not typical for untreated lymphoma due to its cystic/necrotic appearance and the dense calcification. A germ cell tumor should be considered in the differential diagnosis. However, although calcification or ossification can be seen in teratomas, the mass does not have the typical imaging features that would render the diagnosis of a teratoma by imaging alone. Thus, in view of this, tissue diagnosis is needed.

The patient underwent an image-guided percutaneous needle biopsy, however, reportedly, the pathology only demonstrated necrotic tissue. Therefore, the patient had a video-assisted thoracoscopic surgery (VATS) with resection of the mass and transection through the thymus to avoid an invasive thoracotomy. The surgeon did not note any suspicious findings of tumor spread.

Reportedly, gross examination revealed a 5.7 cm diffusely necrotic friable mass with focal cystic degeneration. Slides (four slides stained with hematoxylin & eosin) submitted to the ITMIG tumor board showed a lobulated mass that was comprised of cellular lobules that are separated by thick fibrous bands (Figure 2A). This architecture is suggestive of a thymoma. The cellular lobules are encompassed by a mixture of large epithelioid cells and small lymphocytes suggestive of a WHO type B2 thymoma. Focally, the thymoma invades into surrounding adipose tissue. In other foci there are scattered clusters of epithelial cells that mark with CK19 without a definite thymocytic component (Figure 2B). Desmoplasia is not identified to suggest carcinoma. While these features are not typical of any particular thymoma subtype it was felt that they are part of the thymoma. More importantly, the clusters of epithelial cells are at the blue inked margin suggestive of a positive margin.

Figure 2 Resection specimen of thymic mass. (A) The mass is comprised of cellular lobules with a mixture of large epithelioid neoplastic cells and small thymocytes, intersected by thick fibrous bands. These morphologic features are consistent with a WHO type B2 thymoma. The thymoma invades into surrounding adipose tissue (upper right-hand side). (B) Focally there are only scattered clusters of CK19-positive epithelial cells (arrows) (CK19 immunostaining, insert) which are present at the blue-inked margin (arrowhead). Magnification ×40, H&E (A,B).

The final staging for this patient indicates Masaoka-Koga stage IIa (transcapsular invasion) (1), and stage I based on T1aN0M0 tumor (2).

The pediatric oncologist presented the patient’s case to the ITMIG group with the following questions: (I) is adjuvant therapy required? (II) What is the recommended follow up modality and frequency? And (III) what are potential associated autoimmune/inflammatory conditions and is there a need for surveillance blood work?

The group recommended that there is no indication for adjuvant treatment. The ITMIG medical oncologist reported that since this is a type B2 thymoma with an R0 resection there is no indication for post-operative chemotherapy. With regards to indication for post-operative radiotherapy the ITMIG radiation oncologist indicated there are currently no clear guidelines, however with an R0 resection and the patient being an 11-year-old radiotherapy should not be offered. The presenting pediatric oncologist brought up the concern of potential tumor seeding, and the group noted that seeding incidence is very low. Furthermore, the ITMIG radiation oncologist reported that radiotherapy would not decrease the risk of recurrence from seeding. As per ITMIG consensus and the National Comprehensive Cancer Network (NCCN) guidelines, the patient will require serial imaging, specifically the group proposed thoracic imaging every 6 months for 2 years, and then annually for 10 years (3). After 10 years an annual chest X-ray could be performed as the optimal duration of surveillance has not been established, and in this young patient a recurrence could occur over 10 years after initial presentation (3). In regards to what imaging modality would be best for surveillance, the sternotomy wires may produce some artifacts in the retrosternal region but these are quite limited to that area. Thus, it was recommended that the first baseline 6-month postoperative imaging be a chest CT scan, with the remainder of the follow-up scans via MRI to reduce the cumulative radiation for this pediatric patient. The only surveillance recommendation was radiological, no routine blood work would be required as ESR and CRP have returned to normal.

Thymoma is a rare tumor in the pediatric population, representing only 1–4% of mediastinal masses in children (4). Staging and prognosis are the same as for adult thymomas (4). Adjuvant radiotherapy is not typically offered for Masaoka-Koga stages II and III thymomas after definitive complete resection due to the late toxicity associated with adjuvant mediastinal radiation in pediatric patients (4). In the adult population adjuvant radiotherapy is considered for stage II thymomas, however the cumulative risk of recurrence is less than 10% based on the ITMIG retrospective database (2), and most of the recurrences occur outside of the radiotherapy fields (5). Follow up imaging for stage II thymoma patients with R0 resection should at a minimum include CT scans of the thorax annually for 5 years, then alternate annually with a chest radiograph until year 11, followed by annual chest radiographs alone (6). In younger patients, especially pediatric patients, MRI should be strongly considered instead of CT primarily to minimize exposure to radiation, though MRI can also improve visualization (6). There is the possibility of late onset autoimmune disorders, especially for those with isolated positive anti-acetyl choline receptor antibodies, and patients should be informed of these risks (7).

We would like to thank all the ITMIG members and the colleagues present for the meeting who made the discussion and this publication possible, including the two presenting physicians and P Bruce, Dr. A Rajan, and Dr. B Weksler.

Conflicts of Interest: All authors have completed the ICMJE uniform disclosure form (available at http://dx.doi.org/10.21037/med.2019.01.03). ACR serves as an unpaid Associate Editor of Mediastinum from May 2017 to Apr 2019. CBF serves as an unpaid editorial board member of Mediastinum from May 2017 to Apr 2019. EMM reports honorarium for lecture from Bristoll-Meyers Squibb, Boehringer Ingelheim, and Merck Sharp and Dohme, outside the submitted work. The other authors have no conflicts of interest to declare.