Recently, robot-assisted surgery using the da Vinci Surgical System (Intuitive Surgical, Sunnyvale, CA, USA) has gained popularity for thymectomy. The advantages of robot-assisted surgery include true three-dimensional (3D) imaging with binocular glasses and the use of multiarticular forceps that allow the performance of high-precision operations. Surgeons can obtain close 3D views of the target anatomy so as to resemble the view when they are actually operating within the thoracic cavity. Furthermore, the presence of devices with multiple articulations within the thoracic cavity enables detachment procedures to be achieved in a natural manner. Both are advantageous compared with the use of straight instruments operated manually. The use of robot-assisted thymectomy in the field of thoracic surgery was first reported in 2001 (1), and Melfi et al. reported robot-assisted surgery for lung cancer in 2002 (2). Successful robot-assisted thymectomy for anterior mediastinal tumors and myasthenia gravis was reported by Ashton et al. in 2003 (3) and was followed by additional reports of good outcomes (4,5). Most reports of robot-assisted thymectomy describe a lateral chest approach similar to those of manual thoracoscopic thymectomy. However, even with the use of a robot, it is difficult to identify the contralateral phrenic nerve, particularly its caudal aspect. The first reports of robot-assisted thymectomy through the subxiphoid approach were published in 2015 (6,7). The camera scope was inserted through a midline subxiphoid incision, which provides an operative visual field like that obtained during median sternotomy, making it easy to identify the neck structures and the location of the bilateral phrenic nerves and to observe the entire left brachiocephalic vein. This report described the surgical indications and techniques of subxiphoid robot-assisted thymectomy (SRT) as shown in Figure 1. 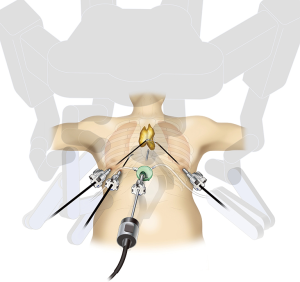 At our hospital, nonrobotic subxiphoid single-port thymectomy (SSPT) is indicated for patients with noninvasive anterior mediastinal tumors and myasthenia gravis without tumors because the procedure is minimally invasive. However, in SSPT, it is difficult to perform suturing. Subxiphoid dual-port thymectomy (SDPT) or SRT is indicated for patients with suspected pericardial tumor invasion because the second port added in the right lateral chest intercostal space makes it easier to suture the pericardial defect during the procedure. SDPT and SSRT are indicated for patients with tumors with possible invasion into the phrenic nerve because they allow easy observation of the phrenic nerves. The da Vinci Xi system is equipped with a port hop function that enables the insertion of the camera scope via any port and therefore allows the observation of the entire length of the phrenic nerve. Selection of the best subxiphoid approach for thymectomy must be guided by the progression of the thymoma. The relative importance of minimal invasiveness and operability might differ from surgeon to surgeon. If focusing on the operability of the procedure, I recommend SRT. The good field of view from the midline of the body and the good operability of robot-assisted surgery make it the most widely indicated among the subxiphoid thymectomy procedures.

Operative preparation and operating room layout are shown in Figure 2. The da Vinci Xi surgical system is used, and the procedure can be performed with both the S and the Si robots. The da Vinci surgical cart can be docked from the lateral side, thereby enabling anesthesia management with the anesthetist positioned cranial to the patient, without disturbing the da Vinci machine. CO2 insufflation is performed with the SurgiQuest AirSeal system (ConMed, Utica, NY, USA), which allows the use of aspiration during insufflation. 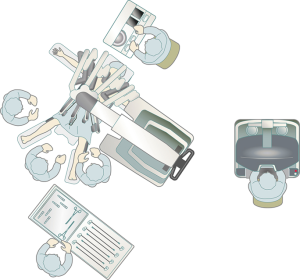 Figure 2 Robot positioning: Robot of the Xi system was docked lateral to the patient. The patient is in the supine position with the arms and legs spread.

The procedure is performed under general anesthesia. Because pulmonary inflation is usually suppressed by the insufflated CO2, differential lung ventilation is not required. In the event that unilateral lung invasion by the tumor requires partial lung resection or if the tumor is displaced to one side, a double-lumen endotracheal tube is used for differential lung ventilation. Minimum pressure-controlled ventilation is used to maintain patient breathing, and positive end expiratory pressure (PEEP) is not used. In some cases, PEEP can result in excessive inflation of the lungs, which impedes the field of view. Elevated CO2 is managed by increasing the ventilation rate.

The patient is in the supine position with the arms and legs apart. If the arms are positioned next to the trunk, the robot arms can hit the patient’s arms. The leg end of the operating table can be lowered so that the camera head does not touch the abdomen. The surgeon stands between the patient’s legs while performing the surgical procedures, and the assistant stands to the right of the patient to operate the camera scope. A 3 cm vertical incision is made approximately 1 cm caudal to the xiphoid process. In SPT, a horizontal incision can be used; in SRT, a vertical incision is made because both the cameral port and port used by the assistant are inserted into the subxiphoid incision. The vertical incision reduces interference between the assistant’s forceps and the camera scope, thus facilitating the manipulations. In addition, a vertical incision can be easily extended caudally if the tumor is large. The incision is made into the subcutaneous tissue using an electric scalpel, and the rectus abdominis and linea alba are separated from the xiphoid process. The caudal side of the thymus is blindly separated from the sternum using a finger. The linea alba, which has just been separated from the xiphoid process, can be felt by moving the finger caudally. Dissection is continued approximately 1 cm caudal to this linea alba. The layer between the rear surface of the rectus abdominis and transversal fascia is blindly separated with the finger to create a space for port insertion. Caution should be exercised so as not to tear the peritoneum. If the peritoneum is torn, CO2 will enter the peritoneal cavity and inflate the abdomen during insufflation; however, surgery can still be continued. A GelPOINT Mini (Applied Medical, Rancho Santa Margarita, CA) port for single-port surgery is inserted. The port enables insertion of three 10–12 mm child ports. To perform SRT, a 10-mm port is used for inserting the da Vinci camera, and a second port is used by the assistant. I inserted the two ports vertically (Figure 3). CO2 insufflation is performed at 8 mmHg. Using a LigaSure Maryland type device (Covidien, Mansfield, MA, USA), the thymus is detached from the rear surface of the sternum. As dissection of the thymus proceeds, insufflation displaces both the lungs and pericardium, thereby expanding the space at the rear of the sternum and improving the visual field. The mediastinal pleura is sectioned bilaterally to expose the thoracic cavity. The pleura attached to the sternum are dissected up to the neck, which allows the pericardium to shift dorsally with gravity. The CO2 insufflation pressure displaces the pericardium and lungs dorsally, thereby producing sufficient space to perform the surgical manipulations behind the sternum. A 1 cm skin incision is made along each of the bilateral anterior-axillary lines at the sixth intercostal space of the precordium to insert the port for the da Vinci system arm. When using the retraction arm, a port is inserted at least 6 cm from the port on the anterior-axillary line to the mid-axillary line in the right sixth intercostal space. The surgeon then moves to the surgeon’s console. 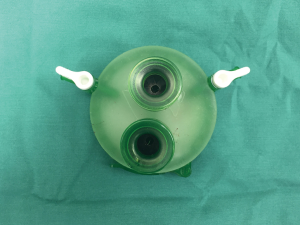 Figure 3 Position of the child ports of GelPOINT Mini: Two child ports are inserted vertically. The camera scope is inserted into the port on the cranial end, and the assistant port is at the caudal end of the incision.

The da Vinci Xi system is docked on the left side of the patient. The camera scope has a 30° perspective and can be moved up or down as needed. It is inserted through the cranial end of the subxiphoid layer. The assistant’s forceps used to support the surgeon are inserted through the caudal end. I performed the surgical manipulations using fenestrated bipolar forceps with soft coagulation as the left arm of the robot and Maryland bipolar forceps with bipolar current or a spatula connected to monopolar current as the right arm of the robot. When using bipolar current, Valley lab forced FX (Valley lab, Boulder, CO), which is set to macro mode with an output of 70, was used as a generator. Thymic vein dissection is performed using a vessel sealer (Intuitive Surgical, Sunnyvale, CA). The resected thymus is placed into a bag within the mediastinum and removed through the subxiphoid incision. A 20-Fr drain is inserted through the subxiphoid wound, thereby completing surgery. A thymoma with suspected invasion of the left phrenic nerve that was treated by da Vinci robot-assisted thymothymectomy is shown in Figure 4. In this case, the retraction arm is inserted on the anterior-axillary line in the left sixth intercostal space. The port hop function of the Xi system was used in that procedure. Inserting the camera scope into the port on the left lateral chest enabled observation of the entire length of the left phrenic nerve. Postoperative progress was uneventful. Pathological evaluation led to a diagnosis of a Masaoka stage II type B2 thymoma. 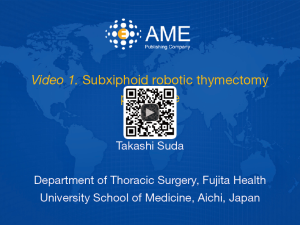 The following two approaches can be opted for future minimally invasive surgeries: minimize invasiveness while maintaining precision or increase precision while maintaining the same level of minimal invasiveness in a more difficult surgery. Single-port surgery is an example of the former; robot-assisted surgery is an example of the latter. The shortcomings of robot-assisted surgery are its increased cost compared with normal thoracoscopic surgery, its requirement of at least three ports, and that the incision is larger than that required in single-port surgery. When opting for robotic surgery with the high cost and the increased number of port, there must be commensurate advantage in patients’ side. I therefore chose nonrobotic SPT for extended thymectomy in patients with noninvasive anterior mediastinal tumors and myasthenia gravis without thymoma, and for single-port surgery, I chose robot-assisted procedures when difficult suturing was required. 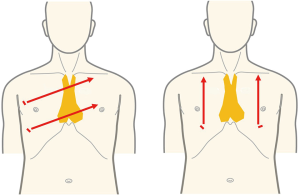 Figure 5 The lateral chest intercostal and subxiphoid approaches for robot-assisted thymectomy: The superior poles of the thymus are not between the left and right arms of the robot in the lateral chest intercostal approach. The entire thymus lies between the left and right arms in the subxiphoid approach, which allows the maximum performance of the robot to be exploited. 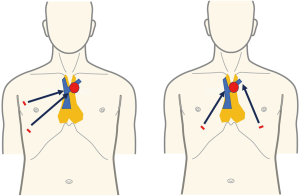 Provenance and Peer Review: This article was commissioned by the Guest Editors Nuria Novoa and Wentao Fang for the series “Minimally Invasive Thymectomy” published in Mediastinum. The article has undergone external peer review.

Conflicts of Interest: The author has completed the ICMJE uniform disclosure form (available at http://dx.doi.org/10.21037/med.2018.01.05). The series “Minimally Invasive Thymectomy” was commissioned by the editorial office without any funding or sponsorship. The author has no other conflicts of interest to declare.

Ethical Statement: The author is accountable for all aspects of the work in ensuring that questions related to the accuracy or integrity of any part of the work are appropriately investigated and resolved.