In the last 2 decades, the robotic approach has become largely employed in thoracic surgery. The first applications were reserved to simple and average procedures, such as early stages lung cancer or thymic hyperplasia. However, with the technological improvements and the parallel development of the technique, the robotic system has progressively been used in increasingly complex procedures, such as advanced lung cancer stages and major lung resections after neoadjuvant therapies (1-3).

Giving its particular features, the robotic system allows the surgeon to reach narrow spaces, to perform an accurate vessels isolation (also in case of tissue rearrangements) and a better hilar and mediastinal lymph nodes dissection when compared with conventional surgical approaches, whilst maintaining the benefits of minimally invasive technique (4,5).

Despite the increasing application of the robotic system for complex thoracic procedures, data on its employment in redo surgery is still lacking. Just few case reports on cardiac surgery and one resection of thymoma after a previous sternotomy, exist (6-8).

Therefore, thoracotomy is to date the approach of choice for those patients who underwent previous thoracic surgery or radiation therapy with a curative intent.

The aim of this case series study is to show the results and the possible advantages of redo thoracic procedures performed with a robot-assisted approach.

We present the following article in accordance with the AME Case Series reporting checklist, available at: http://dx.doi.org/10.21037/med-20-47.

The protocol followed during all procedures reported in the present study, was founded on approved medical procedure routinely used in clinical practice at the investigators’ institution, Azienda Ospedaliera Universitaria Pisana. The authors are accountable for all aspects of the work in ensuring that questions related to the accuracy or integrity of any part of the work are appropriately investigated and resolved. The trial was conducted in accordance with the Declaration of Helsinki (as revised in 2013). Approval by the institution ethics committee was not required as dictated by local laws. All patients had provided informed consent prior to any procedures.

The data of patients treated by robotic approach between January 2017 and January 2019 who underwent a previous radiotherapy with curative intent or surgical treatment were prospectively collected and retrospectively analysed.

Age, comorbidities, preceding treatments and interval between the two procedures, type and duration of surgery, length of stay and complications were evaluated.

R0 resections (negative surgical margins) was defined by the pathologists as the macro and microscopically absence of cancer cells on resection margins.

The follow-up was obtained on an outpatients’ clinic or by phone call basis.

This study is a retrospective case series analysis of standard surgical procedures and was conducted in accordance with the Helsinki Declaration. A written informed consent was obtained from all patients.

All the procedures were performed under general anaesthesia with a single lung ventilation.

A totally endoscopic port-access approach was used in all cases.

In order to increase the operating space, CO2 insufflation between 5 and 9 mmHg, was applied.

At the end of the procedures in the majority of cases, only one chest tube was applied (excepted in the case of hyperthermic intrathoracic perfusion).

A standardized port mapping was used in all of the procedures and for both sides:

❖ Lung resections: the patient is positioned in postero-lateral decubitus with the operating table tilted at the tip of the scapula. The first incision (camera port) is performed in the 7th/8th intercostal space following a perpendicular line going from the head of humerus to the camera incision; the 2nd and 3rd incisions (posterior 2 ports) are performed along the same intercostal space (when possible, limited to chest wall structure of the patient) the more posterior one in the auscultatory area. The anterior port is positioned in the 5th–6th intercostal space along the anterior axillary line, just above the diaphragm. Due to the variability of the chest shape, it is particularly recommended to check the port positioning through the internal camera view, in order to perform the higher posterior incision at the same level as the of posterior inter-lobar fissure line.

❖ Posterior mediastinal tumours: the patient is positioned in lateral decubitus as described for lung resection. Even the port mapping is unvaried.

❖ Pleurectomy and hyperthermic intrathoracic chemotherapy (HITHOC): the patient position and port mapping are the same as those applied for lung resection. This technique has been previously reported by our group (9).

After the removal of the pleura, the robotic platform is undocked and the perfusion system Performer LRT (Rand, Medolla, MO, Italy) is connected to allow inflow and outflow from the chest drainage. The pleural cavity is then filled with isotonic high-temperature fluid and, when the intrathoracic temperature has reached 42.5 °C (intrathoracic temperature probe is used), at this point the chemotherapy agent solution (cisplatin 80 mg/m2 and doxorubicin 25 mg/m2 with a concentration based on patient’s body surface index) is added. The HITHOC perfusion lasts up to 60 minutes and then the pleural cavity is emptied. The hyperthermic perfusion full procedure time is approximately 120 minutes. For the entire duration of the procedure the patients remain in lateral decubitus under general anaesthesia.

Statistical analysis was performed using the SPSS version 23.0 (SPSS, Chicago, USA). Continuous variables were expressed in mean and standard deviation (SD) or median and range. Overall survival (OS) and disease-free survival (DFS) were calculated with the Kaplan-Meier method until the last follow-up (March 2020) or death.

The patients’ characteristics are shown in detail in Table 1. They were five males and four females with a median age of 73 years (range, 49–84 years). 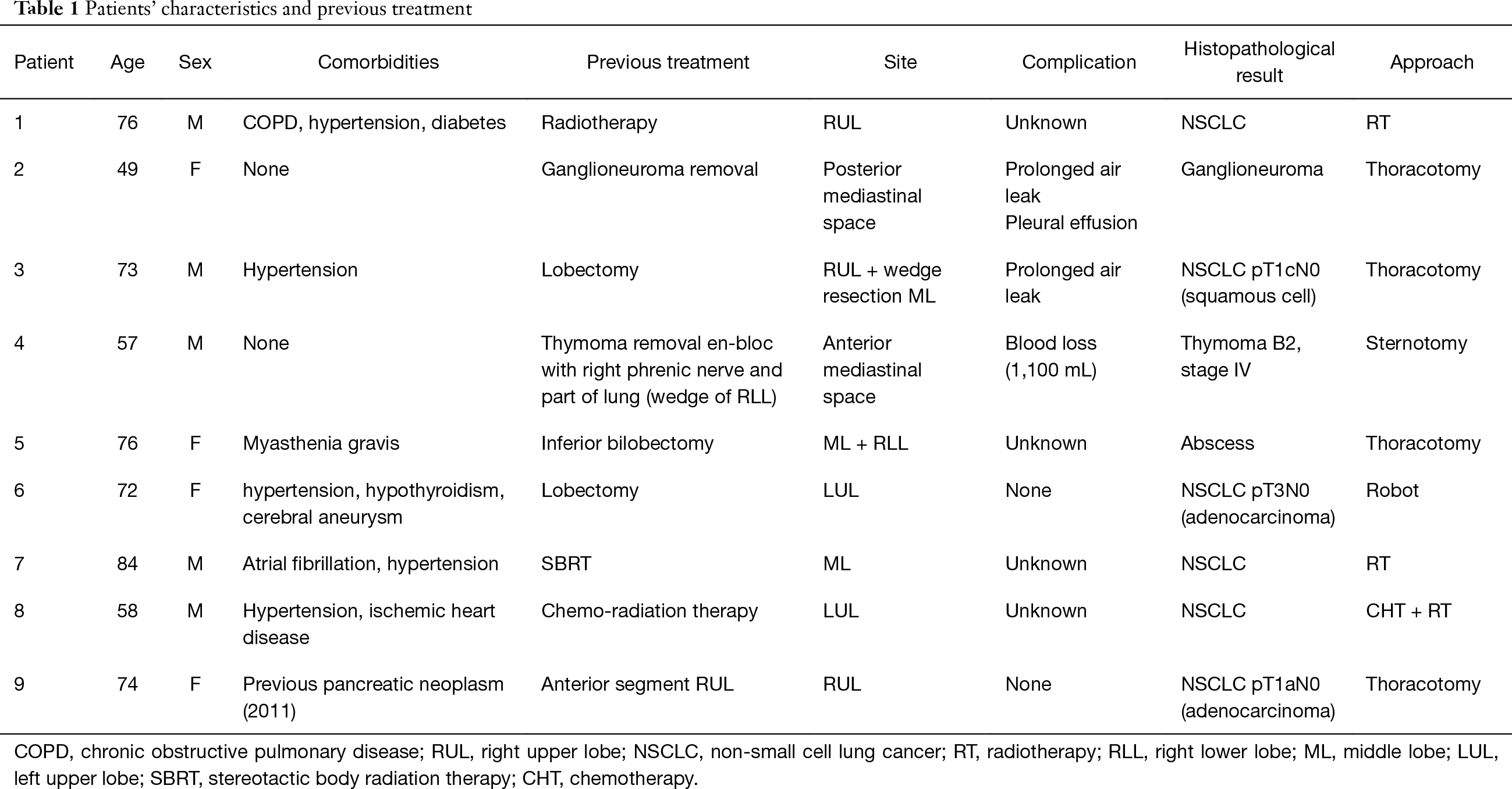 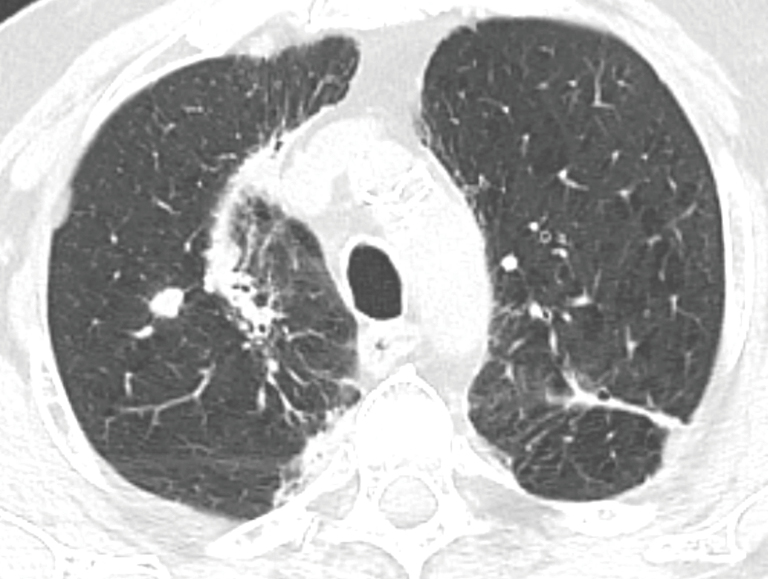 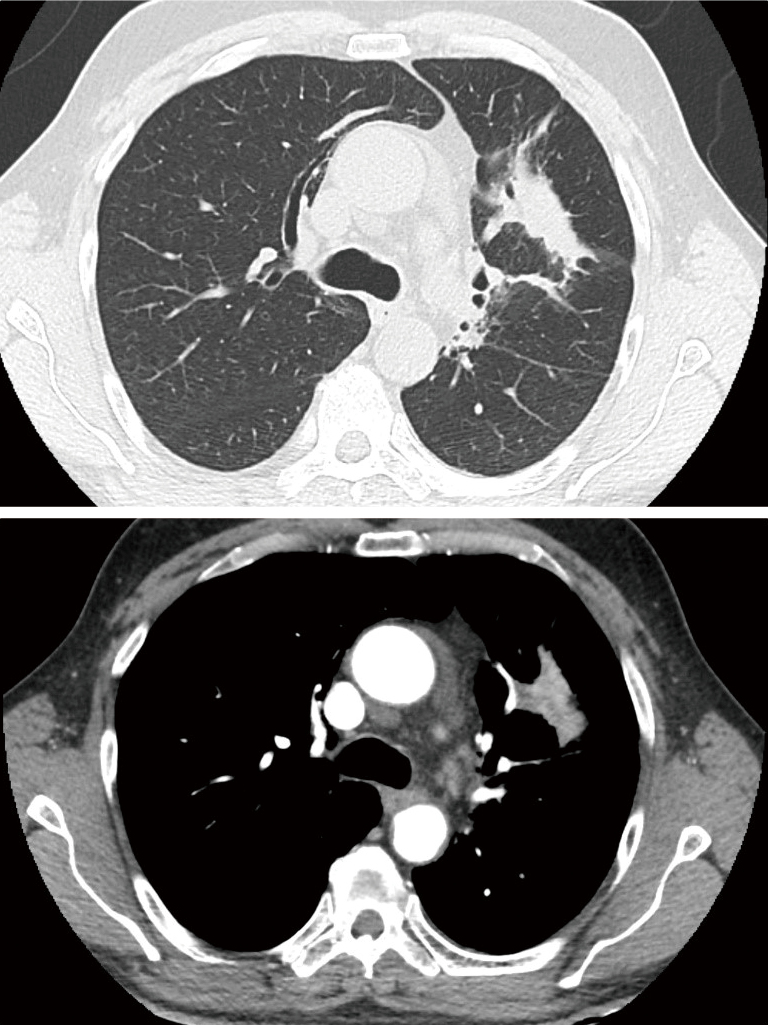 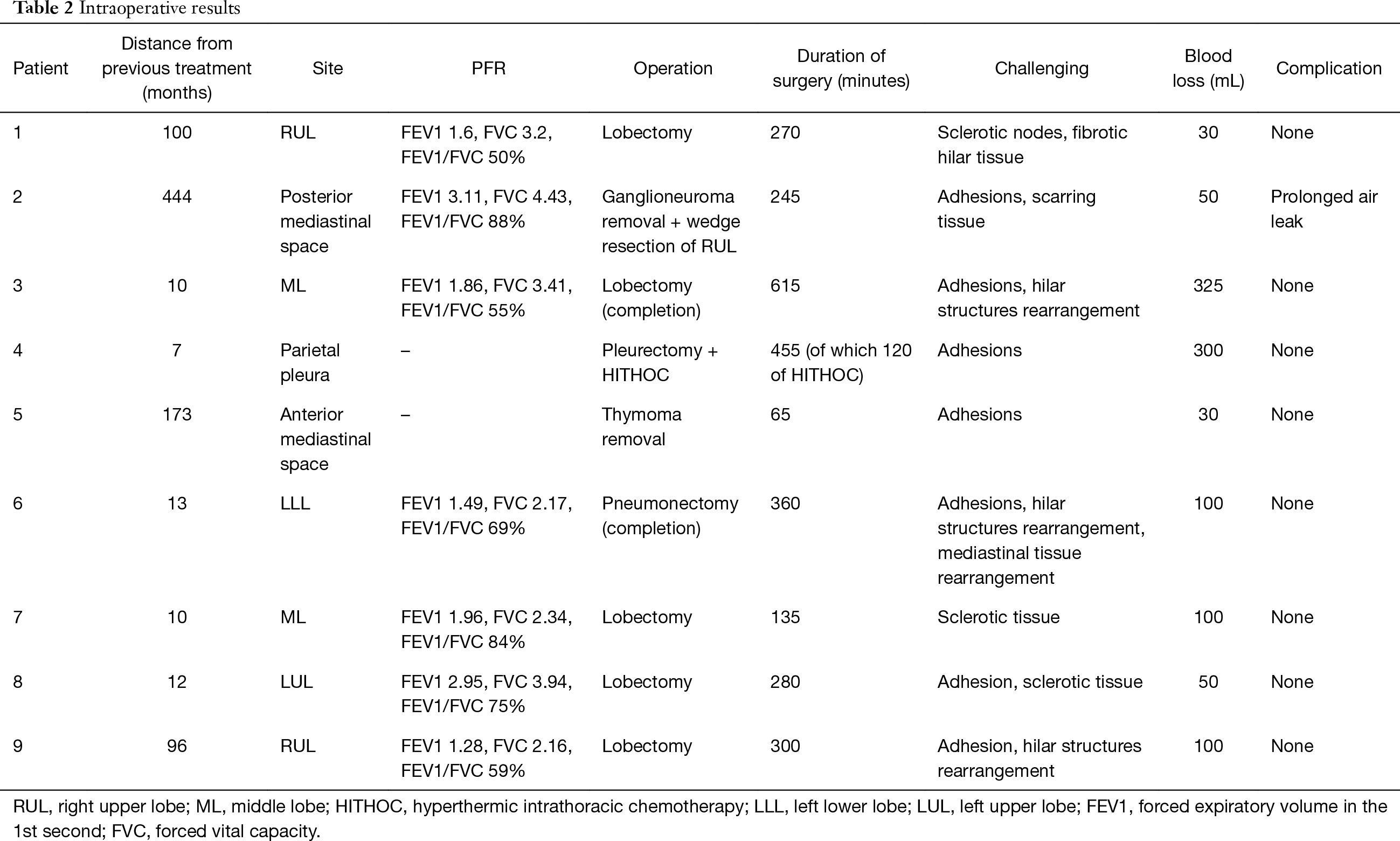 The mean time interval span between the two interventions was 96.12 months (range, 7–444 months). 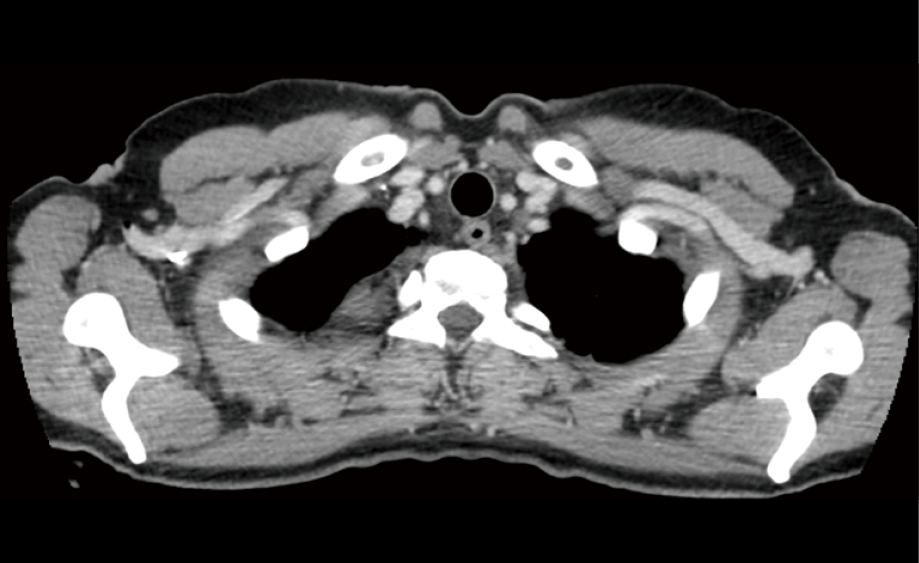 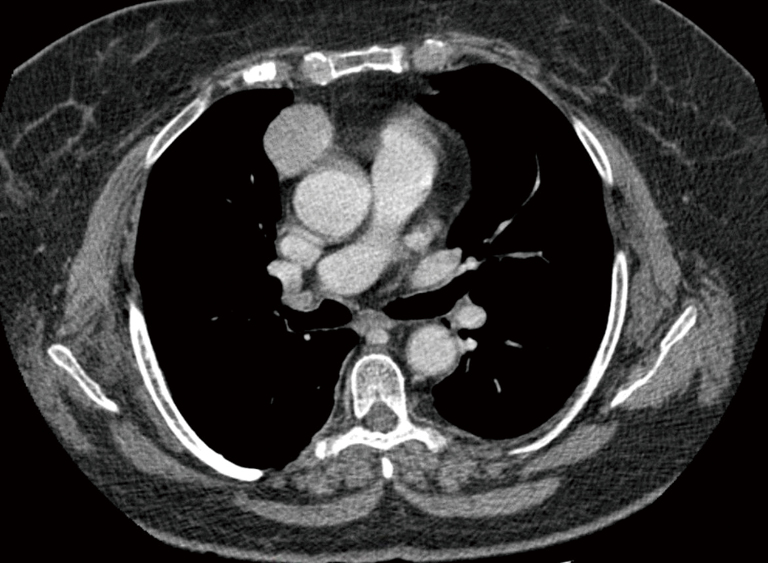 The conversion rate was 0%. No postoperative death occurred. Only one complication arose (air leaking) treated conservatively.

All lung cancer patients and patients treated for mediastinal tumours resulted as R0.

Three patients after the surgical procedures underwent adjuvant chemotherapy. With a median follow-up of 10 months (range, 2–12 months), all patients are currently alive, disease free, and with an OS and a DFS of 10 months.

Numerous studies have described the outstanding results of robotic surgery, which is nowadays considered a safe and feasible procedure, with less postoperative pain, shorter hospitalization, lower immune response and better aesthetic results when compared to the conventional surgery (10-13).

Since its first application for lung procedures (2001), the robotic system has been extensively employed in a broad range of thoracic intervention and it has progressively been applied to increasingly complex procedures (1-3,13)

The advanced features of the robotic platform are well established: 3D high-definition camera with up to 10 magnification and the wristed instrument with 7 degrees of freedom allow the application of this surgical system also to challenging procedures (14). Nevertheless, the open approach still remains the cornerstone of redo surgeries and complicated interventions.

During an operation after previous surgery, especially after open procedures, the most common difficulties are represented by pleuro-parenchymal adhesion (Video 1) and hilar structures rearrangement (Video 2). The advanced instrument control, the tremor filtration and the better visualization of operating field, compared to the conventional surgery, allow the surgeon to deal with the complex identification of anatomic structures in the areas with adhesions or anatomical aberrations. In addition, the latest robotic platform allows a more precise and safe dissection especially in case of enlarged and sclerotic lymph nodes, thanks to newest technical up-grades. All these features permit to perform complex procedures as the completion pneumonectomy, often associated with increased perioperative mortality and morbidity (15,16).

In this series, only one minor complication occurred: a 6-day air leak in a patient who underwent reintervention after 37 years with a previous posterolateral thoracotomy.

The mean operating time of the patients previously treated with surgery was 348 minutes (range, 65–615 minutes) comprehensive in 1 case of the hyperthermic perfusion full procedure time (120 minutes); the longest procedure (615 minutes) was a ML completion due to tenacious adhesions and a total anatomical hilar structures rearrangement.

After radiation therapy, applied with curative intent, the anatomic rehash of hilar structures and the substitution of mediastinal tissue with sclerotic tissue can render the vascular isolation and dissection a challenging step. Three patients of this series had been previously treated with radiation therapy (one with concomitant chemo-radiation).

In all cases, a 4-port totally endoscopic approach was used with a mean operative time of 228 minutes (range, 135–280 minutes). No post-operatory complications occurred.

In the current series, no patients required blood transfusion, which is the most common post-operative complication of surgery performed after previous treatment or in case of manipulated pulmonary hilum.

In this initial experience, the results are encouraging and confirm the safety and feasibility of robotic approach also in case of redo-robotic surgery.

The major limitation of this study is the small series even though it is the first case series describing the application of robotic platform in TRRS.

The Authors thank Teresa Hung Key for the proofreading.

Conflicts of Interest: All authors have completed the ICMJE uniform disclosure form (available at http://dx.doi.org/10.21037/med-20-47). FM is an official proctor for Intuitive Surgical. The other authors have no conflicts of interest to declare.

Ethical Statement: The authors are accountable for all aspects of the work in ensuring that questions related to the accuracy or integrity of any part of the work are appropriately investigated and resolved. The study was conducted in accordance with the Declaration of Helsinki (as revised in 2013). Approval by the institution ethics committee was not required as dictated by local laws. All patients had provided informed consent prior to any procedures.