Thymoma is an uncommon malignancy that develops from thymus in the mediastinal space (1). Surgery represents the only option for radical treatment, and after thymectomy, survival is very good. Unfortunately, some patients are diagnosed with distance metastasis or develop distance recurrence after surgery. In these cases, complete healing is no longer reachable, and systemic chemotherapy represents the most important treatment to achieve disease control and prolong survival (2,3). The natural history of thymoma is frequently characterized by paraneoplastic syndromes. In advanced setting, these syndromes often complicate the therapeutic procedures, determining interruptions of oncologic treatment and making necessary other specialized interventions. Pure red cell aplasia (PRCA) and myasthenia gravis represent the most important thymoma-related syndromes (4). PRCA is a condition characterized by depletion of medullary precursors of red blood cells and hypo-proliferative anemia, that sometimes can expand to the other cell lines, resulting in a condition of pancytopenia (5). The treatment of this condition is carried out with the administration of immunosuppressive drugs, with good results in terms of hematologic response (6). Ciclosporin, one of the most used drugs in this condition, is very effective to block the immune activity against medullary cells in PRCA, permitting to achieve a long-term response, but, at the same time, it seems to a have also a direct cytotoxic effect against tumor cells, although is role for treatment of thymoma is still debated (7,8). Here, we present a case of a patient with metastatic thymoma and PRCA who achieved a stable disease of cancer during the treatment with ciclosporin but with a complete lack of response of hematologic condition.

A 60-year-old man accessed to hospital in February 2015 because of the recent appearance of upper limb edema. He underwent a CT scan that showed multiple pleural and pulmonary mass in left hemithorax, the biggest of 9.7 cm at the base of lung, besides a thrombosis of left brachiocephalic vein. After the start of anticoagulant therapy, a fine needle aspiration was conducted on a pleural lesion, and the histological exam revealed its origin by the thymic gland. A diagnosis of Masaoka IV stage thymoma was established, and the patient was taken charge by Department of Oncology, where a first-line chemotherapy with ADOC regimen (doxorubicin 40 mg/mq day 1 + cisplatin 70 mg/mq day 1 + vincristine 0.6 mg/mq day 3 + cyclophosphamide 700 mg/mq day 4, every 21 days) was indicated. Among March and July 2015, the patient underwent 5 cycles of chemotherapy with acceptable toxicity and showing a partial response at the third cycle CT scan and a stable disease at the end of treatment, as well as the resolution of venous thrombosis. Due to the early partial radiological response and to avoid platinum nephrotoxicity and anthracycline cardiotoxicity the patient received only 5 of the 6 planned cycles. The patients started clinical and radiological follow-up, with quarterly CT scans and physical examinations. Follow-up remained negative until May 2018, when the CT scan showed a dimensional increase of mediastinal and pleural lesions, qualify as progression disease according to RECIST 1.1 criteria. Considering the time to relapse and the other available options, the patients underwent chemotherapy with a rechallenge of ADOC regimen. After the first cycle, the patient began to show a decrease in hemoglobin values (Hb), passing from 9.5 to 6.7 g/dL in 1 month, and he was forced to stop chemotherapy. The reference blood count reported the following results: white blood cells count (WBC) 5,400/mcl, Hb 6.7 g/dL, mean corpuscular volume (MCV) 93.9 fl, mean corpuscular hemoglobin concentration (MCHC) 34.4 g/dL, platelets count (PLTs) 560,000/mcl, reticulocyte rate (RET) <0.5%. Iron, transferrin, B12 vitamin and folic acid were normal, while ferritin was above the upper limit of the normal range. These values were confirmed by subsequent blood chemistry checks. Endoscopic exams were conducted to exclude the presence of active bleeding by endoscopic exams and a virological screening was performed, resulting negative for the following possible etiological agents: EBV, Parvovirus B19, HIV, HBV, HCV and CMV. After multiple blood transfusions, the patient was evaluated by the hematologist, who indicated the execution of bone marrow aspiration (BMA). The exam showed a serious depletion of erythroblasts, confirming the hypothesis of the condition of PRCA, likely related to thymoma (Figures 1,2). Initially, the hematologist indicated continuing chemotherapy with transfusion support, but in August 2018, 2 months after the end of the first cycle of chemotherapy, the patient accessed again to hospital and severe thrombocytopenia (PLTs 14,000/mcl) was found. During hospitalization, multiple red cells and platelets transfusions were necessary and a second BMA was conducted, showing a condition of medullary aplasia of both erythrocyte and megakaryocytic lines (cellularity of 30%, myeloid blasts <1%, 5% mitosis) (Figures 3,4). Immunotherapy with ciclosporin 200 mg/day was started in September 2018 (goal of therapeutic range 100–400 ng/mL), with the addition of prednisone at a dosage of 25 mg/day. After 1 month of therapy, even though the therapeutic range of cyclosporine has been reached, no substantial increase of hemoglobin and platelets was observed. Then, eltrombopag 150 mg/day was added to therapy and the ciclosporin dosage was increased up to 400 mg/day. At the end of September 2018, the patient was evaluated with a CT scan, which showed an important reduction of tumor tissue (>20%). During the next 3 months, the patient continued immunotherapy for PRCA, but hemoglobin and platelets didn’t increase, then restart chemotherapy wasn’t possible and several transfusions of red cells and platelets were necessary. At the end of December 2018, the patient was evaluated again with a CT scan, showing an additional reduction of tumor tissue (<20%), even though the absence of chemotherapy in the past 3 months. Although the excellent trend of response of tumor lesions, the patients didn’t resolve his medullary aplasia, and immunotherapy with ciclosporin was continued. The patient was evaluated again by the hematologist, who decided to stop ciclosporin and start oral cyclophosphamide, but subsequently, the bone marrow depletion attacked even the white line, producing a condition of pancytopenia, and the patient passed away in March 2019. 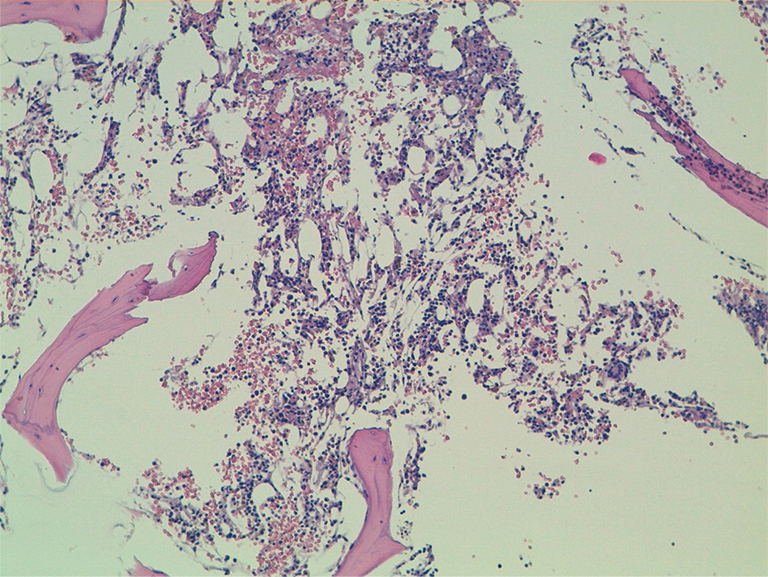 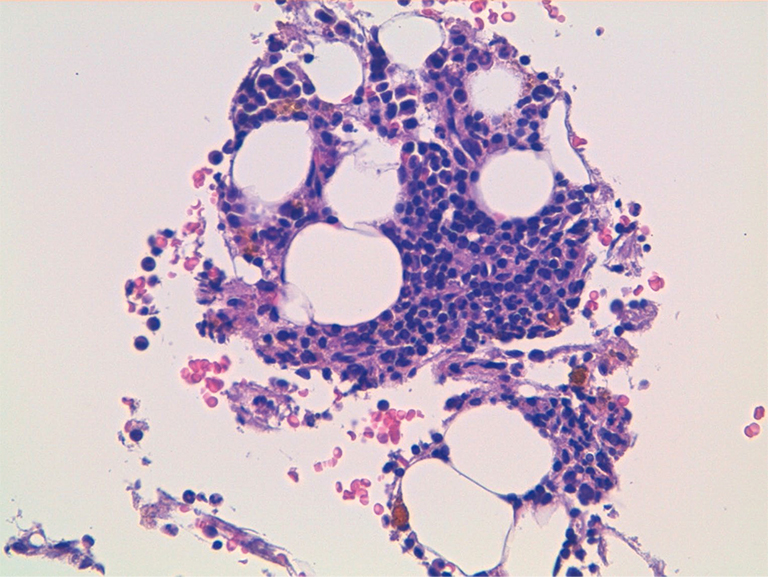 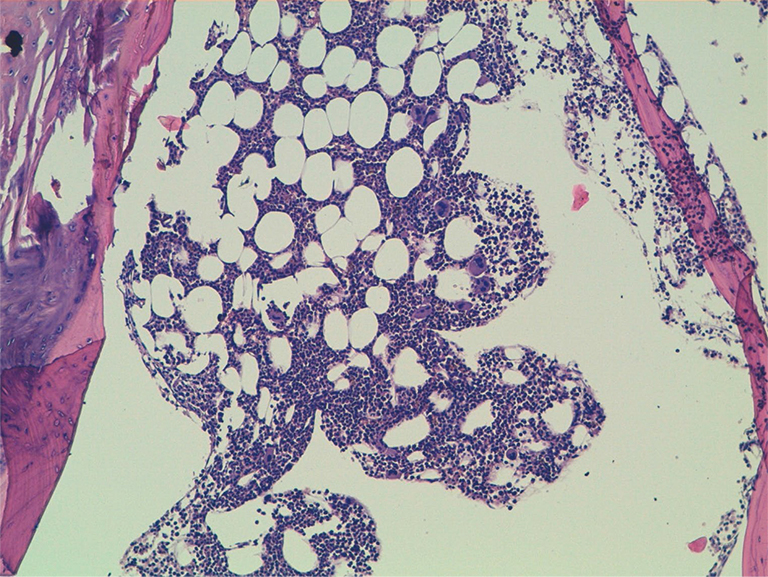 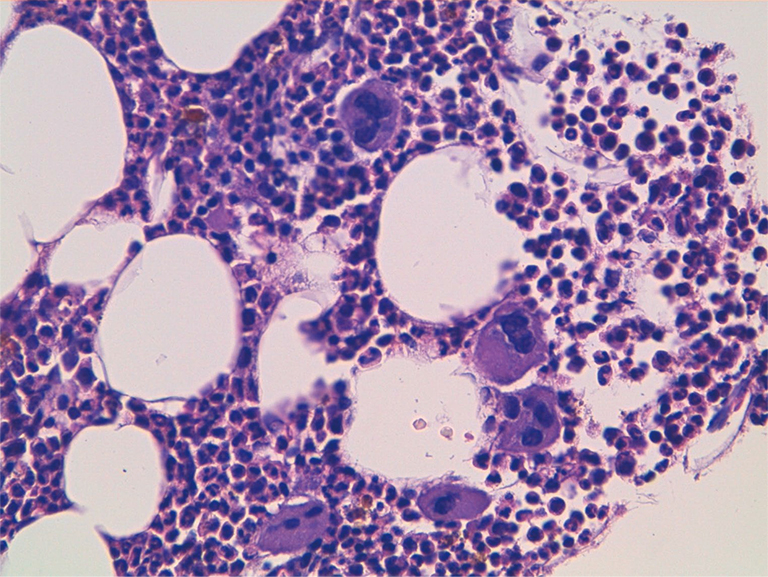 This paper provides a case of patient with thymoma-related PRCA treated with ciclosporin who achieved a tumor response but without any improvement by the hematologic point of view. The reduction of tumor mass, although it didn’t meet the criteria to be considered a partial response, demonstrated that ciclosporin is probably an effective drug against thymoma, and confirm the results emerged from other studies (7,8). PRCA is a complicated condition, strictly related to thymoma, which mechanism is not completely understood, even though the role of T-cells in producing suppression of medullary erythropoiesis has been considered (9). Normally, in not metastatic diseases, PRCA resolves completely after thymectomy. Otherwise, the management of PRCA is hard when it arises in patients not suitable for radical treatment, but in most cases, long-term immunosuppression allows them to achieve good disease control. This case suggests that probably the pathogenesis of PRCA is much more complicated than we thought, and it could be based on different molecular pathways, independent by thymoma genetics. It’s interesting to underline the results of BMAs, which described a situation of almost complete loss of precursor cells, before of red line cells and after even of megakaryocytes. To better understand the pathogenesis of PRCA, these evidences suggest that even if the condition is provoked by an immunological reaction against medullary steam cells, the patter of damage seems to go toward an irreversible depletion of hemopoietic precursors. To confirm that, the patient passed away showing a decrease even in white cells count at blood tests, then is probably that a hypothetic third BMA would show a complete medullary aplasia. This feature could explain the failure of immunotherapy in this case and others, in which the situation of the medulla is almost progressed toward a complete myelofibrosis. If so, the problem of early diagnosis of PRCA would become essential, because it would be critical to identify the clinical condition and start an immunosuppressive treatment as soon as possible, to avoid the arising of irreversible damages. This case represents the first report of discrepancy between tumor response and complete lack of blood response in a patient with thymoma and PRCA. Although thymoma remains a rare malignancy, PRCA is one of the most common paraneoplastic syndromes related to this cancer, and it is a frequent cause of therapy interruption, clinical impairment, and death. Further studies will be necessary to assess the anticancer effect of ciclosporin, which nowadays is still debated. Combined with cortisone, this drug could become an effective and well-tolerated alternative for therapy of advanced thymoma, regardless of the presence of PRCA. At the same time, the genetics and pathology of PRCA deserves further investigations, because only a depth knowledge about these mechanisms could permit an effective integration among immunosuppressive and anticancer therapies.

Ethical Statement: The authors are accountable for all aspects of the work in ensuring that questions related to the accuracy or integrity of any part of the work are appropriately investigated and resolved. Written consent has been obtained from the patient.