Radical esophagectomy is very important for improving the overall survival and quality of life in patients with esophageal cancer (1,2). Traditional esophagectomy includes transthoracic and trans-hiatal approach (3,4). Transthoracic approaches have open and minimally invasive esophagectomy (MIE), such as Swee, Ivor-Lewis, and McKeown approach (1). Potential advantages of MIE include: the lower cardiopulmonary complications, less post-operative wound infection, decreased post-operative pain, and shorter length of hospitalization than conventional open esophagectomy (5,6). Robotic esophageal surgery is a type of transthoracic MIE surgery and still has disadvantages of single lung ventilation in surgery and many postoperative cardiopulmonary complications (7). Transhiatal esophagectomy is regarded as a type of MIE because of avoiding open thoracotomy, but it is still considered less accurate because it only shows a minimal surgical view and deficient mediastinal lymphadenectomy by conventional specialized mediastinoscopy (8). Recently some clinical studies on non-transthoracic radical esophagectomy have been reported from Japan and China (9). This report focuses on the novel minimally invasive techniques for esophageal cancer surgery, which is single-port inflatable mediastinoscopy and laparoscopic surgery (10). The procedure is described in detail.

The patient lies in the supine position with the legs apart. The operating table leans to the right, and the left shoulder is raised 10 cm with a soft pad. This position makes it easier for the surgeon to perform mediastinal and intraperitoneal operations (Figure 1). In the mediastinal operating section, the surgeon stands on the patient’s cephalic side, the photographer is on the surgeon’s right side, and the scrub nurse is on the patient’s left side. In the abdominal operating section, the surgeon stands between the patient's legs. The assistant stands on the right of the patient and the photographer and scrub nurse on the left (Figure 2). 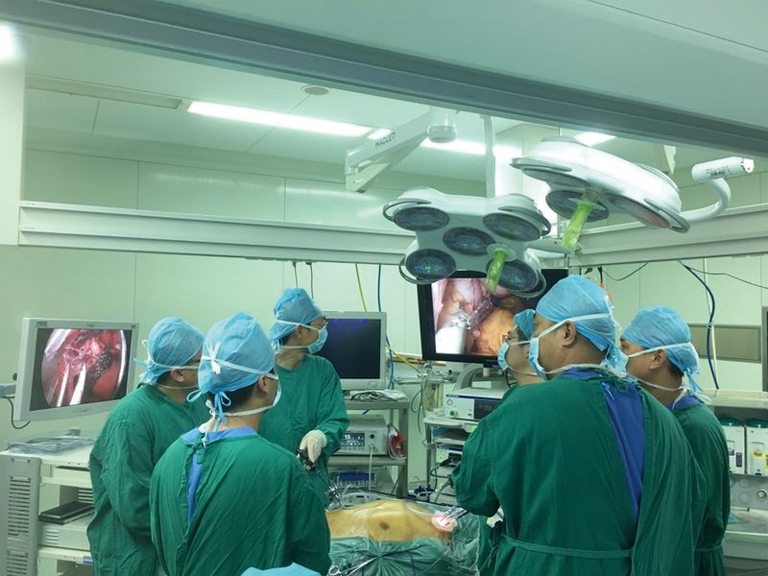 Figure 2 The location of the surgeon and assistants. 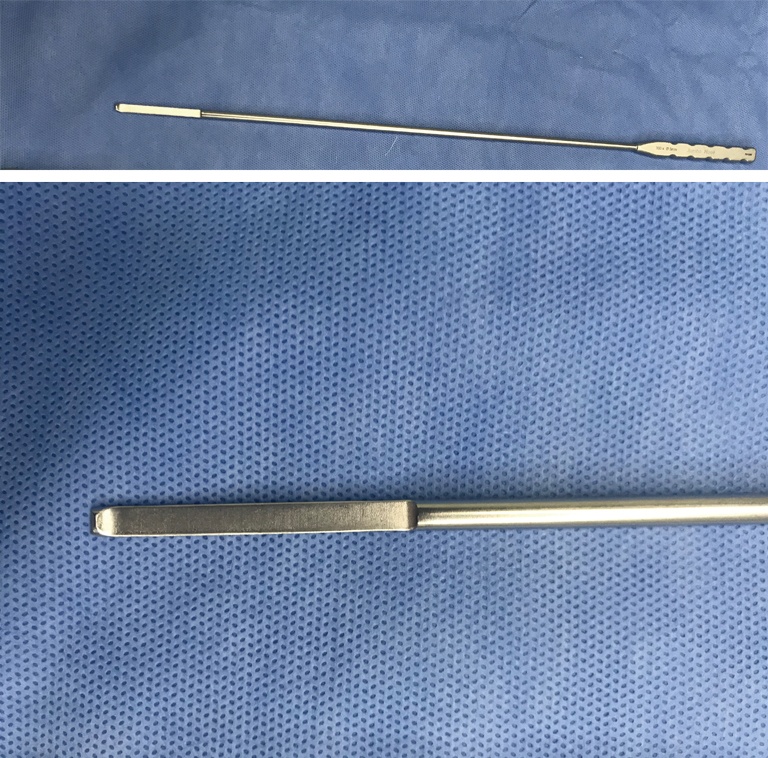 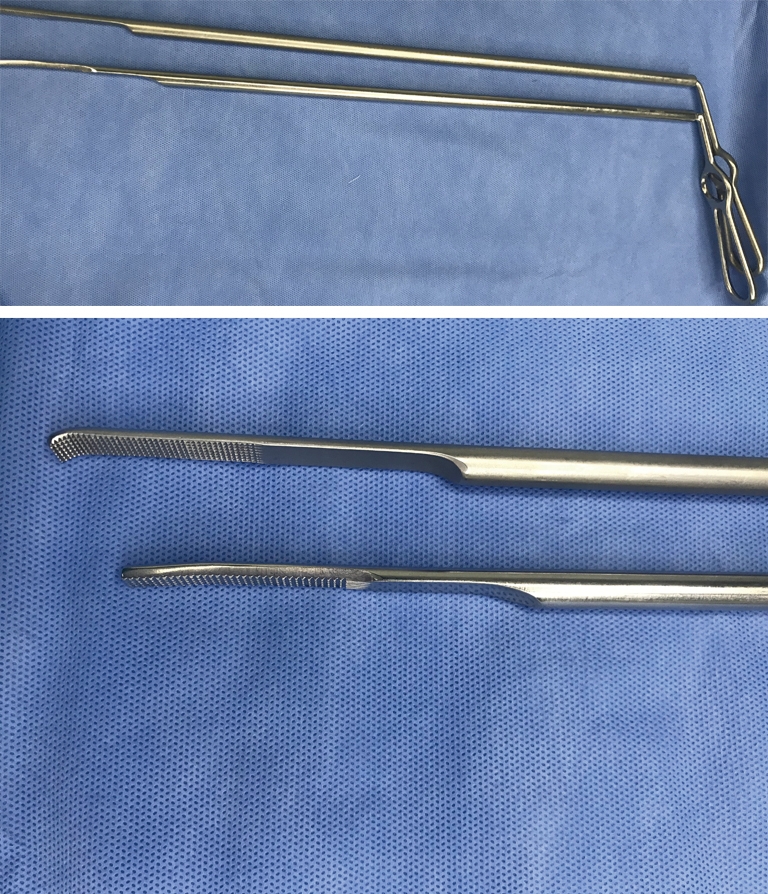 For upper mediastinal operation, lateral incision of the clavicle was made about 3 cm from the supraclavicular region in the left neck. Through the incision, anterior cervical muscles were cut with an electric scalpel, and the left internal jugular vein and the left common carotid artery were exposed by pulling the inside margin of the left sternocleidomastoid muscle outward. Then the cervical esophagus was exposed by pulling them with a hook. The cervical lymph nodes along the left recurrent laryngeal nerve (RLN) were removed and the RLN clarified through the inferior thyroid gland. The cervical esophagus was dissected. A protective sleeve (Ø35 mm) is installed inside the incision and was then covered by the matched protective cover (Figure 5). Three trocars (Ø5 mm) were placed into the cover, and CO2 insufflation is performed into the mediastinum with 10 mmHg to make artificial mediastinal emphysema (Figure 6). The assistant provides an excellent view by a 5-mm 30-degree lens through a trocar, while the surgeon inserted a Maryland forceps and an upper mediastinal retractor through the other two trocars. Firstly, along the left side of the esophagus, the upper mediastinal retractor has pushed the esophagus to the right. 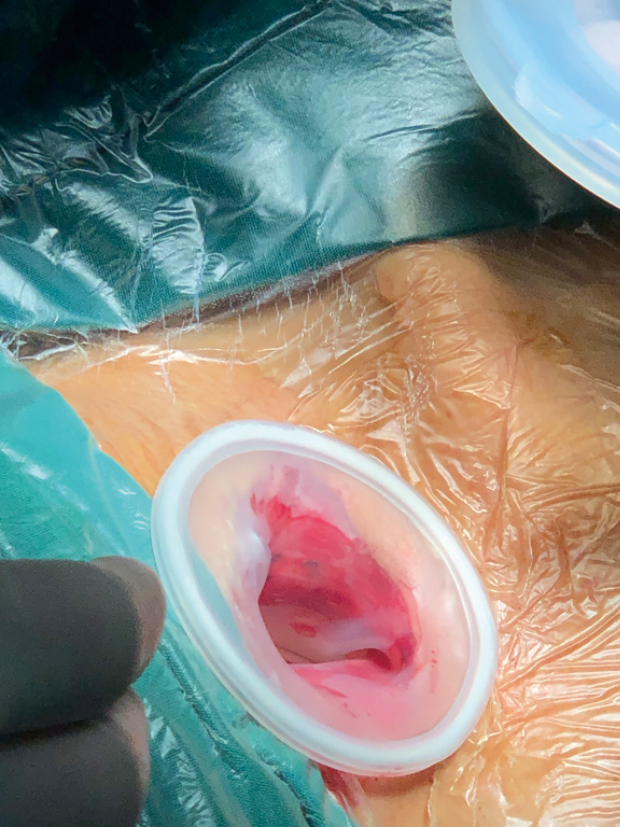 Figure 5 The incision covered with a protective cover. 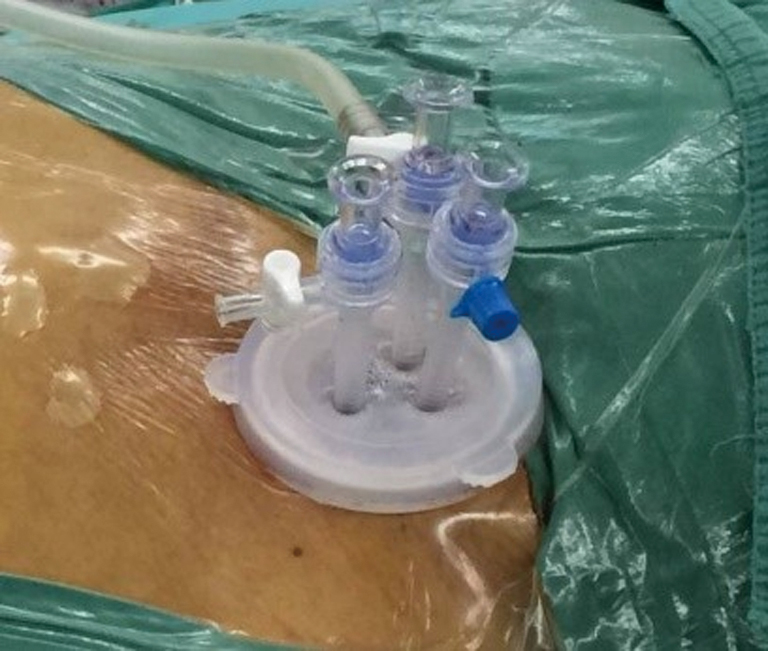 Figure 6 Three trocars (Ø5 mm) were placed into the cover and CO2 insufflation was performed into the mediastinum.

For laparoscopic operation, the incisions of the 5 ports for the laparoscopic operation were performed as described. One, the surgeon performed the procedure by making two 1 cm incisions at 3 cm from the umbilicus. Next, the assistant did a 1 cm incision under the right costal margin and a 5 mm incision under the xiphoid process. The photographer was placed through an incision about 3 cm below the left costal margin as the laparoscopic port (Figure 1B). The stomach was dissected by the conventional method, and the lymph nodes around the stomach were removed.

The right gastroepiploic artery was reserved and the short gastric artery, the ultrasonic scalpel was used to resect the gastrocolonic ligament and the gastrosplenic ligament. The gastric coronary vein and left gastric artery were exposed and ligated by Hemlock; by way of dissecting the surrounding lymph nodes. The ultrasonic scalpel was used to open the esophageal hiatus; two lower mediastinal retractors were placed to expose the esophageal hiatus. The Maryland forceps was used to dissect the tissues bluntly and removed lymph nodes near the esophageal hiatus and the lower esophagus. The perforation was not achieved until the lower esophagus was completely mobilized.

The esophagus was cut off at the neck, and a nail anvil was inserted into a pouch which was made in the proximal end, and then the purse stitching was tightened and fixed to prepare for anastomosis, while the distal esophagus was closed with suture. The esophagus and stomach were pulled out through a 5-cm subxiphoid incision. The linear stapling device was reconstructed for a 4 cm wide tubular stomach. The tubular stomach might be carried up to the neck through the esophageal bed or retrosternal approach. The circular stapler device anastomosed the tubular stomach and cervical esophagus. Gastrointestinal decompression was performed by inserting a gastric tube through the anastomosis. A nutrition tube was inserted and fixed in the jejunum through the subxiphoid incision, which was provided access to enteral nutrition. The mediastinal drainage tube was indwelling, and each incision was closed with appropriate sutures. It was the end of the operation.

Majority of the institutions perform MIE with the transthoracic approach (1). This is due to thoracic surgeons’ familiarity with the transthoracic approach and clear surgical view (11). Recent developments in endoscopic surgical devices and techniques have enabled underdone transmediastinal approach with total pneumomediastinum assistance for esophageal cancer (9); we developed a novel method for single-port inflatable mediastinoscopy and laparoscopic surgery for esophageal cancer. It solves the problems of conventional transmediastinal approach with a limited surgical view, insufficient mediastinal lymphadenectomy, single lung ventilation, and cardiopulmonary complications (10). Upper mediastinal lymphadenectomy by a transmediastinal approach depends on the anatomy of the RLN and the esophagus; the lymph nodes along the RLN can be dissected easily under endoscopy vision by transmediastinal approach, especially those around the aortic arch and the lymph nodes behind carina of trachea. The mediastinum around the aortic arch and left tracheobronchial angle are critical in lymphadenectomy along the left RLN in this area. A pneumomediastinum not only expands the mediastinal space but also makes it easy to identify these structures including bronchial arteries, vagus nerves, lymphatic vessels and mechanical retraction of the aortic arch. The right visual field provided by the transmediastinal approach is helpful and safe to the surgeon. It saves a lot of time that upper mediastinal operation and laparoscopic operation are undergone simultaneously, if two groups of surgeons stand like we demonstrated. It is a very good surgical technique that is worth to promote.

Informed Consent: Written informed consent was obtained from the patient for publication of this manuscript and any accompanying images.