Phosphatase and tensin homolog (PTEN) regulates cell proliferation and survival, cell metabolism and genomic stability (1). It constitutes a potent tumor suppressor (2). A loss of function is frequent in neoplastic diseases. Germline mutations of PTEN cause cancer susceptibility syndromes, such as Cowden’s disease (3). PTEN functions as a phosphatase for lipids, mainly the phosphatidylinositol (PtdIns)-3,4,5-triphosphate (PIP3). It thereby antagonizes the phosphatidylinositol-3-kinase (PI3K)/AKT/mTOR signaling pathway (Figure 1). PTEN, however, displays also non-enzymatic functions such as regulation of transcription and maintenance of genomic stability (1). The protein localizes to the cytoplasm and the nucleus (1,4). 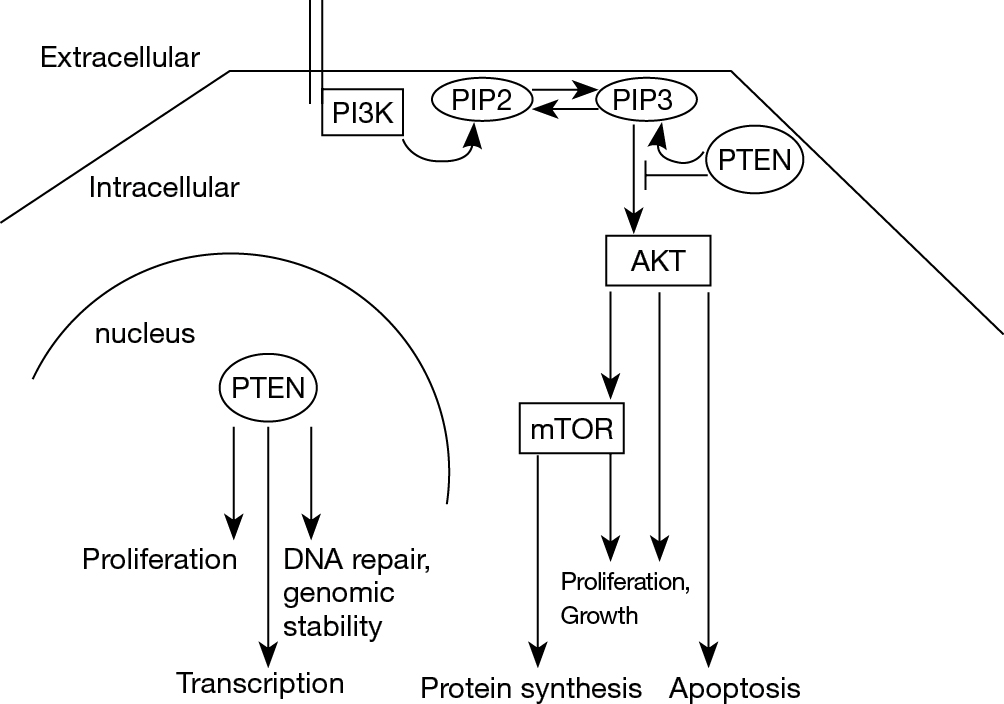 Figure 1 Intracellular function of PTEN. PTEN acts as a phosphatase for lipids to dephosphorylate PIP3 to PIP2 in the cytoplasm and thereby antagonizes the PI3K/AKT/mTOR pathway. In the nucleus PTEN is a regulator of cell proliferation, transcription and DNA repair to maintain genomic stability.

PTEN is frequently downregulated in malignant tumors. The mechanisms are inactivation by gene mutation or deletion, and transcriptional or translational silencing by promoter methylation and miRNA interference (1). A PTEN pseudogene (PTENP1) can also influence PTEN expression. The homology of its transcripts 3‘ untranslated region to PTEN allows it to quench PTEN-targeting miRNAs (5).

Masunaga et al. (6) analyzed the expression of PTEN and PTENP1 in thymomas and thymic carcinomas. They studied by immunohistochemistry the presence of PTEN protein with two different antibodies (clone 28H6 and polyclonal antiserum ab31392) in non-neoplastic thymus (n=2), type A (n=3), AB (n=8), B1 (n=11), B2 (n=6) and B3 thymomas (n=5) and thymic carcinomas (n=4). In sixteen cases (two non-neoplastic thymi, three A, five B1, two B2 and one B3 thymomas and three thymic carcinomas) additional PTEN exon sequencing, promoter methylation analysis and comparison of PTEN and PTENP1 transcript levels were performed with epithelial cells isolated by laser capture microdissection.

The authors hypothesized that epithelial cells of non-neoplastic thymus expressed PTEN protein and, inferring from the function of PTEN as a tumor suppressor, assumed that thymomas and thymic carcinomas might exhibit a loss of PTEN protein. In contrast to this expectation, PTEN protein was not detected in non-neoplastic thymic epithelial cells, except for a few cell nuclei of Hassall’s corpuscles. Furthermore, B1 and B2 thymoma cells did not express PTEN, and nuclear PTEN positivity was observed in only one of five B3 thymomas. By contrast, type A thymomas and thymic carcinoma cells did express PTEN protein. In type AB thymomas PTEN protein was present only in the type A component. Neither PTEN mutations nor promoter methylation were detected in any of the samples. PTEN mRNA expression was highest in non-neoplastic thymi and lowest in type A thymomas. PTENP1 transcript expression did not differ significantly among non-neoplastic thymus, thymoma and thymic carcinoma samples and is therefore an unlikely regulatory cause of the differences in PTEN expression. The authors speculated that non-neoplastic thymic epithelium and type B1/B2 thymoma cells possessed a mechanism of PTEN translational repression and/or acceleration of protein degradation, whereas type A thymoma cells exhibited transcriptional repression of PTEN and accelerated translation and/or protein accumulation (6).

A caveat of the study by Masunaga et al. (6) is the small number of analyzed samples. In particular, only two non-neoplastic thymi were studied. This restricts the meaningfulness of some of the results and conclusions offered. Furthermore, the authors describe the isolation of epithelial cells for RNA analysis by laser capture microdissection. However, the procedure is not described in detail and it is therefore unclear whether cell enrichment or single cell isolation was performed and how the purity of the samples was verified. This is a crucial issue as non-neoplastic thymi and B1/B2 thymomas in particular are rich in non-neoplastic lymphocytes. These lymphocytes, which strongly express PTEN protein, might have been a source of the relatively high PTEN mRNA content in the non-neoplastic thymi and B1/B2 thymomas. Conversely, type A thymomas contained few lymphocytes and exhibited low PTEN mRNA levels, but were immunohistochemically PTEN positive. Interestingly, thymic carcinomas contained also only few lymphocytes, but their PTEN mRNA levels were not significantly different from B1/B2 thymomas. The PTEN promoter methylation analysis was carried out with PCR primers previously described by Wiencke et al. (7). The methylation experiments published by Masunaga et al. (6), however, did not include positive control samples. An inclusion of appropriate controls would have corroborated the reliability of the results.

Leisibach et al. (15) assessed PTEN expression only in the cytoplasm with a different anti-PTEN monoclonal antibody (clone D4.3). Whether a nuclear expression was also present as observed by Masunaga et al. (6) and Enkner et al. (12) is not reported. In their 21 analyzed thymoma and thymic carcinoma samples no significant difference in cytoplasmic PTEN protein expression was noted.

The lack of PTEN protein in non-neoplastic thymic epithelial cells and B1/B2 thymomas reported by Masunaga et al. (6) is intriguing. In mice, a PTEN knockout leads to embryonic lethality, and a heterozygous PTEN loss causes the emergence of tumors at various sites (16). A targeted heterozygous PTEN deletion in thymic epithelial cells of mice results in a smaller thymus with significantly disordered architecture and histology (17). Observations made by Masunaga et al., may lead us to infer that PTEN protein is not essential for epithelial cells in the human postnatal thymus, or that low PTEN protein levels that are not detected by immunohistochemistry are sufficient.

Analogous to the observation by Masunaga et al. (6) in normal thymic epithelia, PTEN protein is not expressed in normal muscle, liver, parathyroid, ovary and prostate glandular cells, although PTEN RNA is present (18). Therefore, in these tissues a regulatory mechanism of PTEN translational repression similar to that proposed by Masunaga et al. for non-neoplastic thymi might be at work. Apparently absent or low PTEN protein expression is not always tumorigenic, and in line with this conclusion a downregulation of PTEN protein has been implicated in enhanced tissue repair and regeneration (1,19).

The functional significance of the lack of PTEN protein in B1/B2 thymomas and of its expression in type A thymomas and thymic carcinomas observed by Masunaga et al. (6) is unclear. However, there seems to be no convincing evidence that PTEN is involved in the pathogenesis of thymic epithelial tumors. Therefore, a clinical impact of the work by Masunaga et al. can not be envisaged at present, although inhibition of the mTOR pathway which may be activated in PTEN repressed thymic epithelial cells is a therapeutic concept currently being validated in clinical trials (20-22).

A remarkable observation made by the Masunaga et al. (6) study is the proposed different regulation of PTEN RNA transcription/translation and protein stability between normal thymus and B1/B2 thymomas on the one hand and type A thymomas and thymic carcinomas on the other. Furthermore, of particular interest is the reported predominant nuclear localization of the PTEN protein in thymic epithelial tumors. Only in thymic carcinomas, and here only with one of the two antibodies employed, an additional weak cytoplasmic staining was observed. It remains to be determined whether one of the presumed nuclear PTEN functions, e.g., control of genomic stability, is of functional importance for the development or maintenance of the neoplastic phenotype in thymic epithelial tumors.