In 2016 the first randomized trial of thymectomy in patients with non-thymomatous myasthenia gravis comparing extended transsternal thymectomy in conjunction with pharmacological prednisone therapy with prednisone therapy alone was published (1). A benefit regarding clinical outcomes in patients undergoing thymectomy was reported. So far there are no randomized trials delivering conclusive evidence on the value of minimally invasive techniques for thymectomy in patients with myasthenia gravis in comparison to the historic standard transsternal technique. The gap of missing high level evidence extends to patients with thymic epithelial tumors with and without myasthenia gravis despite of increasing numbers of patients undergoing surgery by means of different minimally invasive approaches with video-assisted thoracic surgery (VATS) and robotic assisted thoracoscopic surgery (RATS) (2). From a great number of different minimally invasive procedures for thymectomy can be chosen from. Decisions on the kind of equipment (VATS or RATS) and a preferred access site (left- or right-sided VATS/RATS, cervical or subxiphoid approach) vary greatly with institutional and the thoracic surgeons experience (3). Literature classifying the myriad of thymectomy techniques is available (4).

Before starting our RATS program a left sided three ports VATS combined with a small cervicotomy was our preferred approach in patients with myasthenia gravis and small tumors (5). At our institution the left sided robotic thymectomy technique became the standard approach for patients with myasthenia gravis and anterior mediastinal tumors (mainly thymic epithelial tumor) with sizes up to 4 cm starting in 2014 (6). We mainly favored the left sided approach to obtain better control of the left phrenic nerve and the innominate vein and its branches. Anterior mediastinal tumors with dimensions larger than 4 cm or radiological suspicion of tumor infiltration of organs neighboring the thymus were resected using mainly thoracotomy or sternotomy. In the presence of myasthenia gravis sternotomy was the standard technique.

To improve surgical radicality and reduce the length of surgical incisions surgeons proposed innovative additions to currently established minimally invasive techniques. Relevant for the current work was the addition of the subxiphoid approach as part of the procedure in order to improve “maximal” thymectomy (7); or putting the focus of surgical dissection at the subxiphoid approach, with just an extra right sided camera (VATS) support (8).

With increasing experience of extended thymectomy by robotic and video-assisted surgery on patients with myasthenia gravis we added modifications to the standard technique in patients with non-invasive thymic epithelial tumor sizes larger than 4 cm. While the minimally invasive resection in patients with tumors >4 cm was feasible, the specimen retrieval through the left intercostal camera port incision and right cardio-phrenic fatty tissue dissection (extended thymectomy in myasthenia gravis patients) remained technically challenging. The purpose of this prospective study was to evaluate the possibility of offering a modified minimally invasive approach as standard alternative for large non-invasive anterior mediastinal tumors in patients with or without myasthenia gravis.

Three male and one female patient were referred to our thoracic surgery division at the Medical University Vienna. The patients had surgery between December 2016 and July 2017. In all cases anterior mediastinal tumor suspicion from routine chest X-ray examinations was confirmed by thoracic computed tomography scanning (Figure 1). Patients with non-invasive anterior mediastinal tumors with sizes greater than 4 cm were included in the study. All patients were asymptomatic and all patients were seen by a neurologist. None of the patients were diagnosed with myasthenia gravis. No previous cardiothoracic operations were carried out in any of the patients. In one case both thymic lobes were affected (5.5+4 cm lesions) and in the other three cases the tumor was predominantly on the left or right side of the sternal line (Table 1). In all cases the described left-sided VATS in conjunction with the subxiphoid approach was used (no right-sided VATS was used). 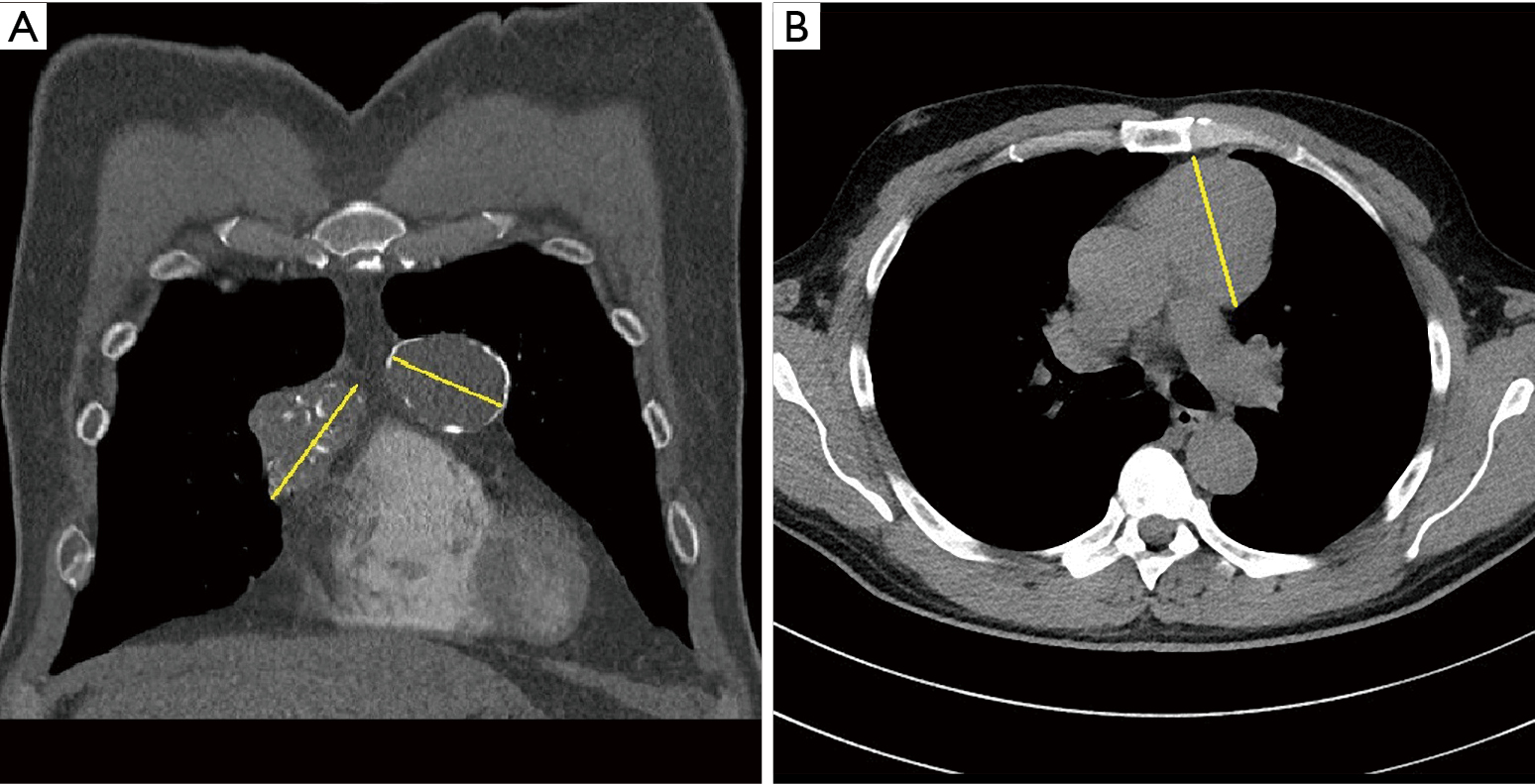 The surgical procedure can technically be divided into two phases (Figure 2):

Figure 2 The anatomical drawing in (A) depicts the resection that can be done under optimal vision by left-sided VATS (first phase of surgery). A subxiphoid incision is added to better visualize the tumor and the regular anatomy in drawing (B). 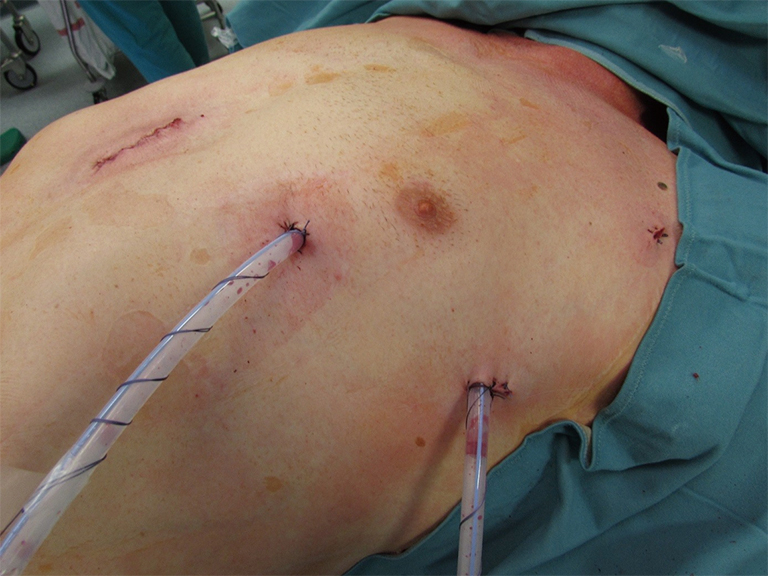 Figure 3 Photograph of the surgical result at the end of the procedure in patient 2 with two thoracic drainages in place.

Operative time ranged from 117 to 151 minutes. Blood loss was less than 150 mL during all procedures. In two cases the final histopathological report revealed results differing from preoperative histology gained by computed tomography guided puncture (marked with * in Table 1). Patients were discharged on the third postoperative day with minimal discomfort at the subxiphoid region. All cases a complete resection with tumor free margins (R0) was achieved. The operative specimens of patients one and two are depicted in Figure 4. No major morbidity or mortality was observed during the 12 months follow-up period. 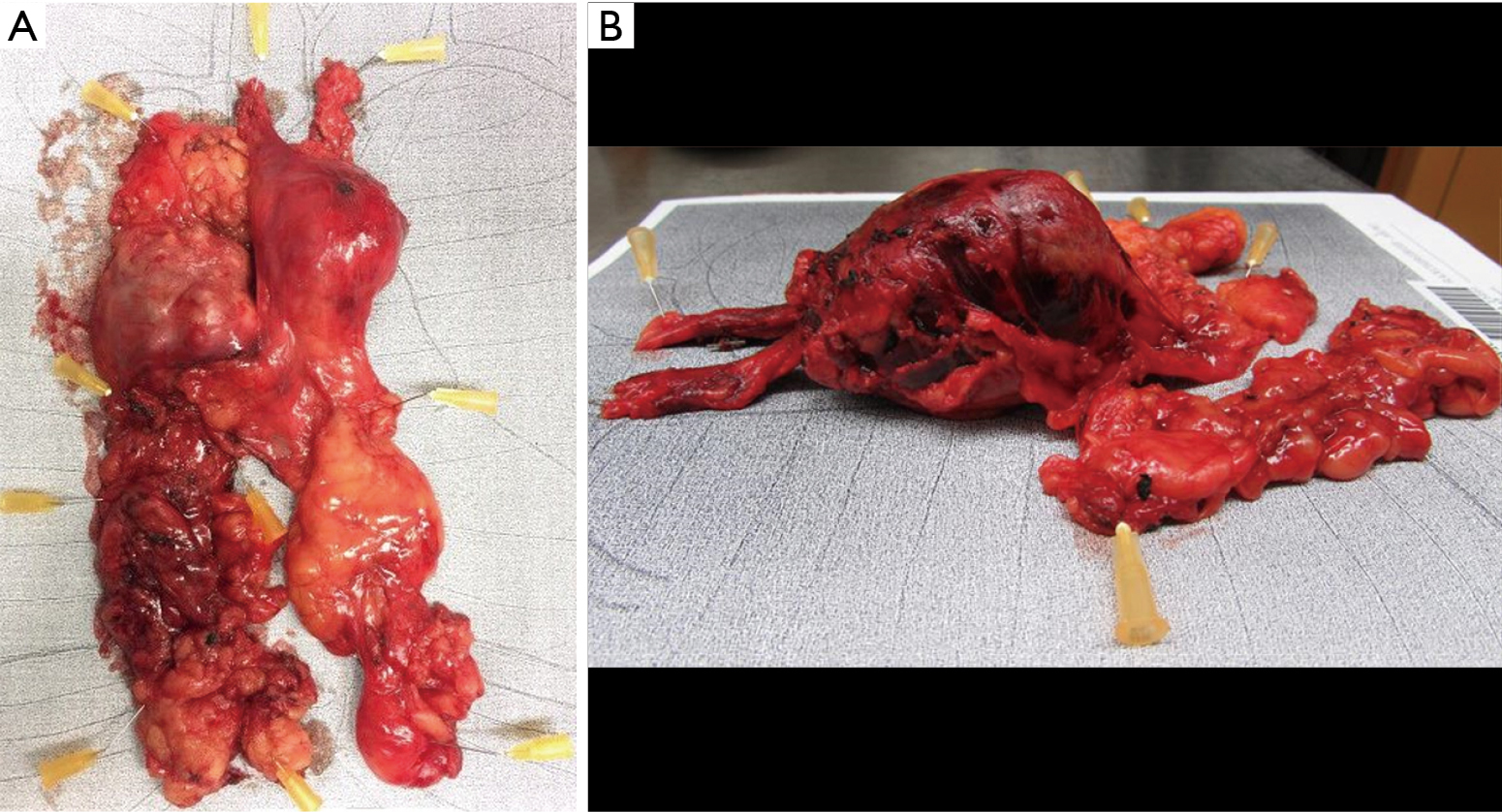 Figure 4 The surgical specimens that were removed in patients one (A) and two (B) are photographed on a mediastinal board.

Continuous shift from median/partial sternotomy (10) to more minimally invasive techniques was observed in the last two decades. The cervical approach became less popular as other well reproducible approaches achieved similar results avoiding the cosmetically disadvantageous neck incision (11,12). The potential use of subxiphoid approaches for thymic resections was based in publications in the 70s and 90s on subxiphoid mediastinal exploration for diagnostic purposes (13,14). In 1999, using a device to lift the sternum complete resections for benign tumors were reported (15). Further milestones with thoracic surgery from a lone standing subxiphoid incision or the combination of a subxiphoid incision with other procedures for patients with myasthenia gravis with or without small thymomas followed. In the recent past several sternal lifting devices were used to lift up the sternum at time of resection (7,16). With the continuous technical evolution, more sophisticated approaches, like RATS or microthymectomy were shown to yield acceptable results dealing with thymic resections (17). The use of single-port devices allowing CO2 insufflation paved the way for complete thymectomy using the subxiphoid approach in a “uni- or biportal way” (16,18). New surgical instruments with longer working length allowed uniportal extended thymectomy without use of CO2 insufflation (to avoid cardiac arrhythmias), but with more difficult control over the innominate vein and the left phrenic nerve (19).

The ongoing debate on which of the various minimally invasive techniques to adopt as an international standard is fueled by the development more and more modifications to innovations to current surgical practice. The described technique of sequential left sided VATS with completion of the procedure with the addition of a subxiphoid incision for right sided dissection for patients with non-invasive anterior mediastinal tumors larger than 4 cm TNM stage I (20) with or without myasthenia gravis was driven in an attempt to control the operative field at any part of VATS or RATS with maximal precision: improve the careful dissection of both phrenic nerves, gain optimal control over the small innominate vein branches draining the thymic gland. In cases of left sided dissection of tumors bigger than 4 cm, right sided dissection (especially control of the right phrenic nerve) and retrieval of the intact specimen for accurate pathological workup remained technically challenging. That was the reason we combined the left sides three ports VATS with the subxiphoid uniportal approach. The combination of the first phase left sided VATS for careful dissection of along the left phrenic nerve, the thymic horns up into the neck and the innominate vein branches with the second phase subxiphoid access for excellent right sided exposure to dissect along the right phrenic nerve, the right cardiophrenic fatty tissue and, at the end of the procedure the uncomplicated removal of the specimen through the subxiphoid incision. Another reason we prefer the subxiphoid access over a right sided camera port is the avoidance of possible bilateral intercostal nerve damage with associated pain hampering thoracic mechanics. The described VATS procedure can be adapted for RATS thymectomy of tumors larger than 4 cm in diameter.

We recommend the addition of a subxiphoid incision to left sided thymectomy VATS o RATS procedures attempting to remove non-invasive anterior mediastinal tumors with sizes above 4 cm. We believe that it is a valid tool to achieve excellent control over the right phrenic nerve and right cardiophrenic fatty tissue making extended thymectomy a more radial and safe procedure without adding significant comorbidity.

Ethical Statement: The Ethics Committee of the Medical University of Vienna confirms that such medical treatments that were carried out under the sole scope of decisions and responsibility of the treating physicians do not require the formal vote of its Ethics Committee. Written informed consent was obtained from the patient for publication of this manuscript and any accompanying images.